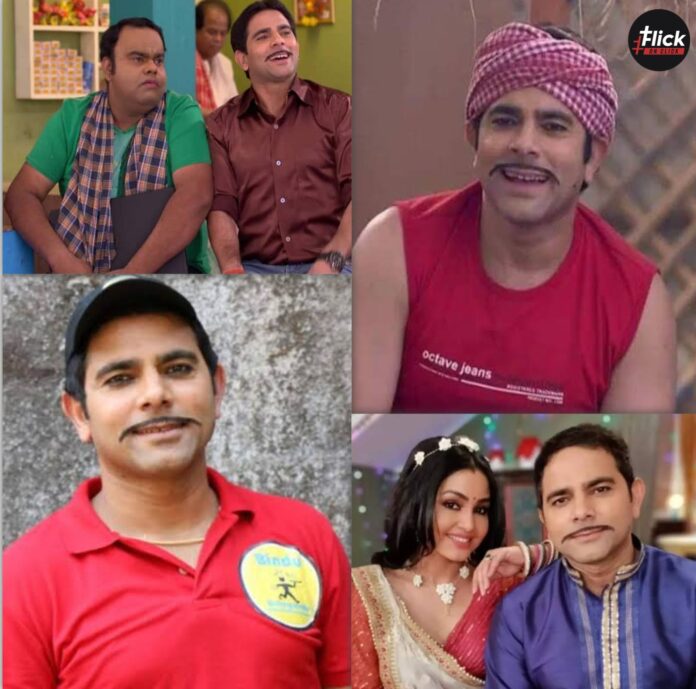 Deepesh Bhan portraying the role of Malkhan in Bhabhi JI Ghar par hai died on 23 July Saturday. The star is said to have fallen while playing sport on Saturday morning. According to reports, he was carried to the hospital and proclaimed dead by doctors. The actor was playing sport with a group of pals near his home when he fainted and fell to the floor. He was transported to a neighboring hospital and pronounced dead. Shubhangi Atre, who portrays Angoori Bhabhi in the drama, confirmed the news and revealed that Deepesh died of a brain hemorrhage.

He was a strong guy who never drank/smoked or did anything to impair his body, and he left behind a spouse, a one-year-old kid, his family, and all of us. Deepesh Bhan has been in several other successful shows, including May I Come In Madam and FIR, to name a few. Producers Binaiferr and Sanjay Kohli favored him. He appeared in practically every one of their programs, either as a cameo or in full-fledged parts.

Deepesh’s mother died last year. He wrote in an impassioned note:  “Maa tum kyu Chali Gai. Love u maa tum bhaut yaad aaogi. I’ll miss u maa. aakhiri Samay Mai pitaji leney Aaye hongey tumhe (Mom, why have you left. Love you mom. I will miss you. In the last moment, dad must have come to take you).”

In shock, gutted ,pained with the news of Deepesh Bhan passing away at the age of 41 yesterday, a very important cast member in f.i.r , Was a fit guy who never drank/smoked or did anything to harm his health, left behind a wife n one year old child and parents and us all 💔💔 pic.twitter.com/FVkaZFT3bI

Deepesh Bhan was the spirit of Indian comedy shows.

India lost one of the best comedians featuring on TV serials like Bhabhi Ji Ghar par Hai and FIR. Flickonclick prays for his soul’s rest and for God to offer his family and friends the strength to bear this huge loss. We shall never forget his generosity. We extend our heartfelt condolences to his friends, family, and fans. Your death saddens us all.

Read More: Everything you need to know about the disease caused by the Monkeypox virus

Previous articleEverything you need to know about the disease caused by the Monkeypox virus
Next articleHow to apply for Indian passport? List of documents and steps explained
Udit Arora

On the recent ban of Tik Tok and 58 other Chinese apps in India left the country in...
Lifestyle

Healthy Food Options at Weddings for the Wedlock Season

Wedding season is just around the corner and probably the day when most of us will overeat and...
News

Samsung has launched another F-series mobile named Samsung Galaxy F62 in India through a Livestream. The company did...
News

Netflix is one of those companies that thrive on their experiments and R&D team's research in order to...
News

In India, Akshaya Tritiya 2022 will be honored on May 3, which is regarded to be one of...
Entertainment

The cinema industry has evolved and we are now getting a hold of future or the past with...
Fitness

7 Food Items Which Are Rich in Folic Acid: Need to Be Included in Your Daily Diet

Maintaining a healthy diet these days is really difficult for an individual as the world seems to run...
Match Prediction