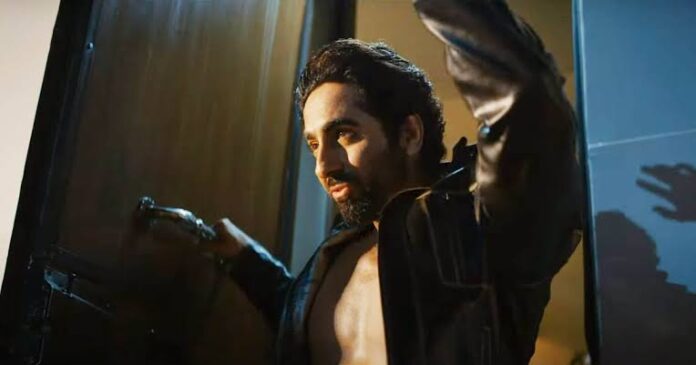 An Action Hero Review: Ayushmann Khurrana is unfortunately not a delight to watch in this Insignificant action thriller that will become irrelevant in about one week. A plain and simple story with predictable outcomes does no good to the premise of the film which already lacked substance.

An Action Hero Story: Maanav (Ayushmann Khurrana) an idol and a successful action hero accidentally kills the brother of a politician in Haryana. He the flees to London to escape the clutches of law and of the man whose brother he has murdered. The politician (Jaideep Ahlawat) follows him to the London to exact revenge. Will the action hero be redeemed or will he be forgotten and branded a killer? This forms the rest of the story.

Let me begin by saying that it’s a movie you are better off not watching in the theatres. Anirudh Iyer, the assistant director turned director has failed to deliver in his first outing. An Action Hero feels lackluster throughout its entire run and it definitely lacks the spark that an action thriller needs to survive.

I don’t know why Ayushmann Khurrana chose to experiment with this script in particular. Maybe he wanted to be seen in a different light but this is not the film he should signed to change his public image as a categorical hero. Even though he has done his part with sincerity the storyline fails his character completely.

Jaideep Ahlawat is decent but his story seems to far fetched in the film. Mirabel Stuart, Hiten Patel and others could not have done anything to save this movie which is destined to be a disaster. It’s an insignificant time that will be lost in just one week or so. All in all, a skippable film that no one needs to pay any attention to.

Found this An Action Hero Review helpful? Do let us know via social media handles.

Previous article
HIT The 2nd Case Review: High on Adrenaline and Suspense
Next article
10 Best Movies and Shows to Watch on Hotstar in 2023
Virat Verma

Kiara Advani is reportedly getting married to her boyfriend, Sidharth Malhotra. It has been reported that Kiara Advani...