For ages, wine has been a component of religious, social, and traditional practices. In the Middle Ages, Benedictine monks believed that moderate wine consumption increased the life span of its monks and served as a treatment for certain diseases. Since ancient times, people have debated the health benefits of consuming red wine. While this has become a contentious issue in recent years, new studies show that these claims are true.

However, wine drinkers may find it difficult to separate reality from the hype. Various scientific research has been conducted on this topic, and the findings can help you comprehend whether moderate drinking of red wine can assist improve your health. Flickonclick will reveal the Secret Health Benefits of Drinking Red Wine

The effect of red wine on heart circulation is one of its most well-known health benefits. Recent research discovered that drinking red wine is associated with a lowered risk of inflammatory and coronary artery illness, as well as a lower risk of suffering from a heart attack. It was also discovered that red wine produced using conventional methods that optimize the quantity of resveratrol and flavanoids in the wine is superior to other varietals in terms of promoting heart health. 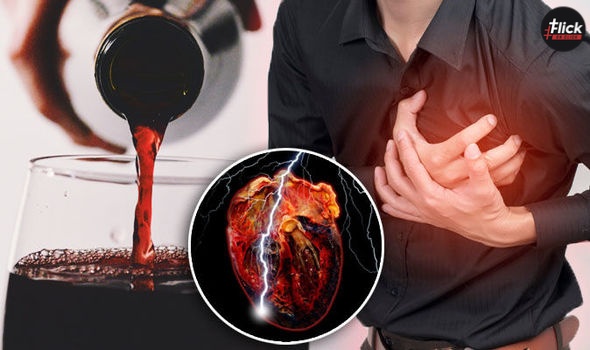 Red wine is high in polyphenols, which are potent antioxidants that help maintain the walls of your blood arteries in your heart. Antioxidants such as resveratrol, catechins, anthocyanins, and tannins are abundant in black whole grapes. Between all of these chemicals, resveratrol and proanthocyanidins are the key radicals responsible for a variety of health advantages, including the prevention of skin aging. They combat aging by repairing collagen and elastin fibers, making the complexion look a lot younger, cleaner, and more supple when combined with flavonoids present in wine.

Red wine may also help reduce the progression of Alzheimer’s disease; nevertheless, more research is required in this regard. Drinking red wine made from black-skinned grapes decreases oxidative stress and may have neurological effects, according to research published in the book Life Sciences. The researchers believed that with more investigation, chemicals found in red wine could help reduce the development and prevent the brain damage linked with Alzheimer’s.

Red wine’s capacity to lower inflammation in the body contributes to some of its heart-health benefits, but there are other consequences for inflammation reduction. According to one study, drinking red wine may help protect patients against the inflammation associated with several dangerous illnesses. This could potentially prevent long-term damage caused by an enhanced immunological response in the system.

Although there is still much to learn about the impact of red wine intake on diabetes that has already been identified, a review of the research published in indicated that the liquor in red wine may avoid diabetes. This impact, however, may not be confined to red wine. According to the article, this protective advantage is most likely associated with moderate drinking in any form.

The Research found that red wine included compounds that lowered the incidence of blood clots. Although, Blood clots are a primary cause of strokes.

Red wine may also aid in the prevention of tooth decay. Certain foods and beverages have been demonstrated to reduce the occurrence of caries, or teeth, in persons who consume them. Red wine was one of these foods.

Red wine’s resveratrol has also been demonstrated to aid in the development and treatment of some malignancies. Red wine contains resveratrol, which can protect against carcinogen harm. It can prevent cancers from growing. Red Wine can restrict the migration of cancer cells all through the body. Moreover, it can reduce the growth of existing tumors. Hence, It can prevent cancer cells from mutating and becoming resistant to treatment.

Previous article
From Apple to Watermelon, What Fruits Can Diabetic People Include in their Diet?
Next article
Wine or Beer? which one is good for your health?
Flickonclick Team

Holidays are here and all we can think of during this season is partying with family, friends and...
Fitness

Beer is reportedly the most popular choice of beverage, drinking beer everyday is kind of a thing in...
Fitness

We live in a society where men have always been careless about their skincare routine. I'm taking the...
Lifestyle

9 Post breakup mistakes to avoid and heal faster from Heartbreak

Breakups are difficult no regardless of what the circumstances are. Whether you're suffering from the anticipated sorrow of...
Fitness

We live in a society where men have always been careless about their skincare routine. I'm taking the...
Lifestyle

8 lesser-known whiskey brands that you must try this weekend

For all the whiskey enthusiasts in the house, you must have seen whiskey brands grow in leaps and...
Fitness

Beer is reportedly the most popular choice of beverage, drinking beer everyday is kind of a thing in...
Lifestyle

Bacardi Breezer normally has an alcohol percentage level of around 4-5% in India. Breezers are considered to be...