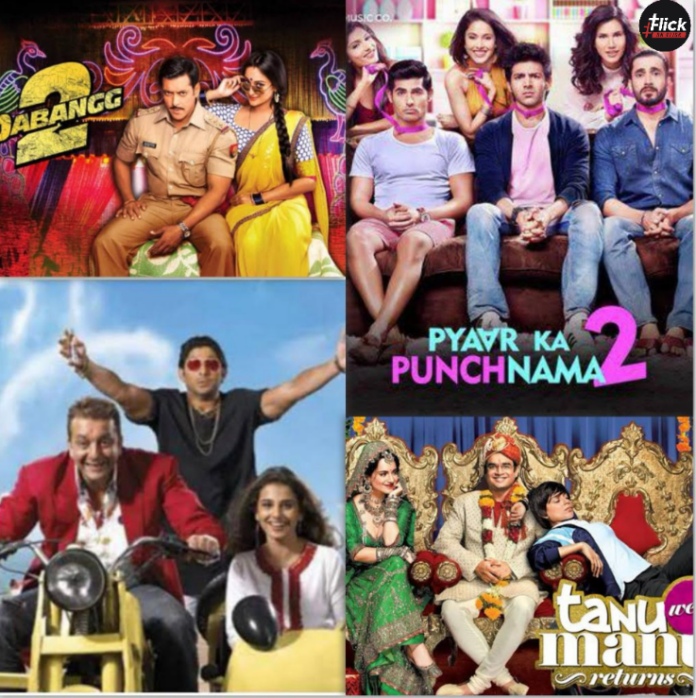 It is a universal truth that every time you see a sequel movie, you are stuck with a feeling of melancholy. There have been countless sequels to blockbuster hits in the Bollywood movie industry. While many sequels wrecked the audience’s expectations following the original film, several managed to garner greater applause and perform better business than the initial. The suspense left at the end of the previous film, as well as the way it continues on the heritage of the writing, make a sequel film greater than the initial one. It’s sometimes as simple as removing a film’s clunkiness and concentrating on its enjoyment. Here are a few Bollywood sequels that outperformed their predecessors.

It is said that if you have never watched Gangs of Wasseypur, you are not a Bollywood fan. The first part of the film was such a superb story that it has not only set the tone for the sequel but also allowed the creators to explore every potential. The original film earned Rs 27.85 crore at the box office, whereas Gangs of Wasseypur 2 collected Rs 43.96 crore.

Yes, Aditya Chopra considered Dhoom to be a franchise, if the first part, which starred popular celeb like Abhishek Bachchan, John Abraham, and in-house star Uday Chopra performed great. So, when Dhoom became the year’s biggest success with Murder, the label launched Dhoom 2, with Hrithik Roshan replacing John as the villain. Two big-name ladies joined the cast Aishwarya Rai Bachchan and Bipasha Basu and the movie budget increased because of  lavish locations and set up in abroad, and the second part of movie became the biggest blockbuster of 2006.

Dabangg 2 was a better picture than the original for several reasons: it moved the tale along with a fluid script that kept the feelings running and a lighter tenor. The screenplay had heart, as opposed to the protagonist’s clinical suddenness and episodic and dismal mood. It addressed subjects such as equality of the gender and respecting elders in brief sequences. Commercially, it produced the same amount of money, but with higher ticket prices and lower profits, and was thus a “failure” as a sequel.

This franchise started with a mediocre thriller that was only successful due to its low budget. Fortunately, it inspired producer Vikram Bhatt to create the much more riveting Hate Story 2. The film was a success and was much liked by audience as compared to first part .Talking about part 3 of the series it was a box office success whereas part 4 of the series underperformed.

Part 1 was a surprise hit because it was completely and unexpectedly fresh in the style of fresh love humor with earthy origins. However, in Part 2, director Aanand L. Rai went all out to demonstrate how a true sequel can go leagues beyond the popular first with some savvy writing and implementation. Because everyone enjoyed Part 2, more people moved back and watched Part 1.

Rohit Shetty had no plans for a latest Bollywood sequels. But now he’s on installment 4, and the box office graph has risen with each part. However, it was with Part 2, named Golmaal Returns, that the comedic factor and calibre skyrocketed. Everyone, particularly Tusshar, was outstanding, and the film outperformed than all other parts and has has set the bar of comedy movies high.

This sequel not only features Kangana Ranaut in two functions, but it also boasts a juicier plot with more surprises than the first part of series. The film will undoubtedly leave the viewers with a nice and happy sensation. The film has collected Rs 1.77 billion ($28 million) , Fans are eagerly waiting for the third part of series.

The surprise twists and turns near the end of Don 2 were undoubtedly a hit. This Farhan Akhtar-directed film earned Rs 2.06 billion ($33 million), whereas Don earned Rs 1.05 billion ($17 million).

The script execution in this film is significantly superior to that in Sarkar. The finale is a significant plus for the film. Sarkar Raj’s earnings were Rs 594.6 million ($9.4 million), whereas Sarkar’s earnings were Rs 400 million ($6.3 million). Another plus for Sarkar Raj is its team, which included the Bachchan trinity (Amitabh, Abhishek, and Aishwarya) dividing screen time.

Read More: 8 Bollywood actresses who are no less than food bloggers