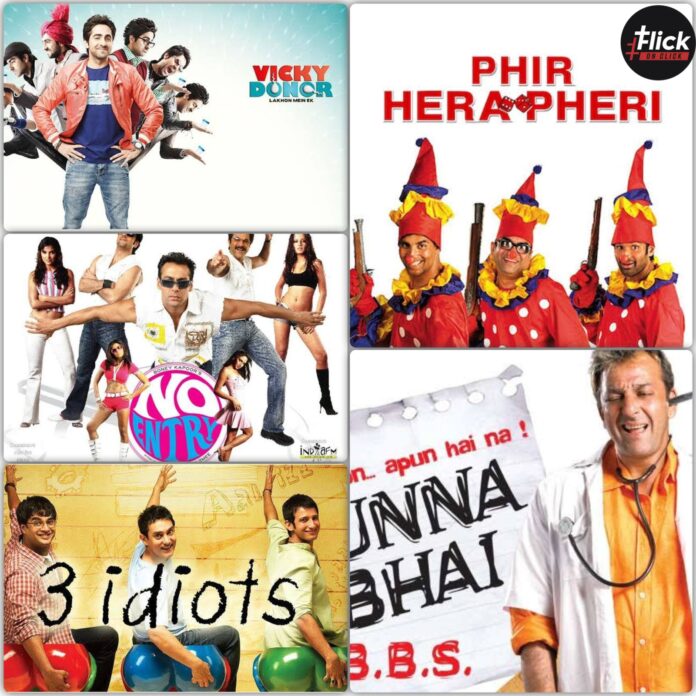 Comedy films are intended to make the viewer laugh via fun. Significantly, they frequently operate by overdoing traits for comic effect. Indian comedy movies are all-around enjoyment, with humor serving as a driving element. Moreover, Comedy films have a crucial function in helping us feel refreshed.

We’ve compiled a list of the top ten comedy movies in Bollywood history.

Andaz Apna Apna is a 1994 Indian Hindi-language Bollywood comedy movie directed and produced by Rajkumar Santoshi. It stars  Paresh Rawal, Raveena Tandon,  Karisma Kapoor, Salman Khan, and Aamir Khan. The plot centers around two slackers who, while fighting for an heiress’s love, accidentally become her bodyguards from a wicked criminal.

Hera Pheri concluded with the three rascals including Akshay Kumar (Raju), Sunil Shetty (Shyam), and Paresh Rawal (Babu Bhaiya) wealthy and well-off. Phir Hera Pheri narrates the narrative of what occurs after they become wealthy when three jobless guys receive a phone call from kidnappers and discover the solution to all of their financial issues. Things, however, do not go as anticipated.

Munna Bhai will be remembered as one of the famous figures of the modern world. While the first episode of this tv movie (Munna Bhai MBBS) was about a gangster don taking over a medical institution, the Chapter (Lage Raho Munna Bhai) was all about Gandhigiri and its significance to current culture. Infact, die-hard enthusiasts are still anticipating the third Chapter with eager anticipation.

Dulhe Raja is one of the most famous Bollywood Comedy movies, and it has had a long run-on broadcast. In the film, Kader Khan (K.K. Singhania) runs a 5 hotel, but the presence of a small Dhaba operated by a part-timer Govinda (Raja) on his property jeopardizes his hotel enterprise. Soon, the conflict between K.K. Singhania (Kader Khan) and Raja (Govinda) develop to several amusing scenarios.

Golmaal is a 2006 Bollywood comedy melodrama movie scripted and produced by Rohit Shetty. The film earned mostly excellent feedback from reviewers and was a stunning box office success. Moreover, the plot centers around four escaped robbers who seek refuge in a cottage owned by a blind family. They meet the lovely, brainless neighbor Rimi Sen there and immediately fall madly in love. More folly follows as the trio attempt to elude their lender Vasool Bhai and prevent a gangster’s plan to recover stolen gemstones.

No Entry is a 2005 Bollywood comedy movie. Anees Bazmee oriented it, while Boney Kapoor produced it.  No Entry was the biggest success in Bollywood in 2005. The narrative of No Entry Mein Entry revolves around three buddies who had strayed on their wives. Hence, the comedy will be at its peak in the film.

Priyadarshan directed and produced the 2005 Indian comedy movie Garam Masala. It was broadcast on the occasion of Diwali in 2005. At the Filmfare Awards, Akshay Kumar earned the title of Best Actor in a Comedy Role. A hilarious story about two flirts who are continually flirting with ladies even though one of them is married. Finally, When the fiancee discovers that her future bride is lying on her, chaos reigns.

3 Idiots was the highest-grossing movie of its period, and it was also a hit in China. Two pals are looking for the 3rd ‘idiot,’ who was the odd one anyway and has been missing since the last day of university. To put it mildly, it’s a roller-coaster experience. Keep an eye out for Omi Vaidya’s wild speech in which he delivers a presentation in Hindi.

A fertility specialist is looking for a healthy and excellent sperm donor. He meets Vicky and persuades him to become a member. Everything is fine until Vicky marries and his truth comes in front of everyone. In addition, his wife is infertile. Significantly, Consider this to be one of the best Bollywood comedy movies made in recent memory.

Hungama is one of the best Bollywood Comedy Movies. Although, Priyadarshan co-wrote and produced the 2003 Indian comedy movie. Moreover, It was based on Priyadarshan’s 1984 Malu movie Poochakkoru Mookkuthi, which was inspired by Charles Dickens’ work The Strange Gentleman. Whereas, It tells the narrative of a group of misfits whose misconceptions about one other’s histories to result in a sequence of crazy, yet amusing outcomes.

Previous article
Loop Lapeta Film Review: Run Lola Run Remake With a Tweak
Next article
TV Series Like Rocket Boys That You Can Binge Over The Weekend
Flickonclick Team

Netflix has a ton of new content planned for you in the coming month. So don’t worry, you’ll...