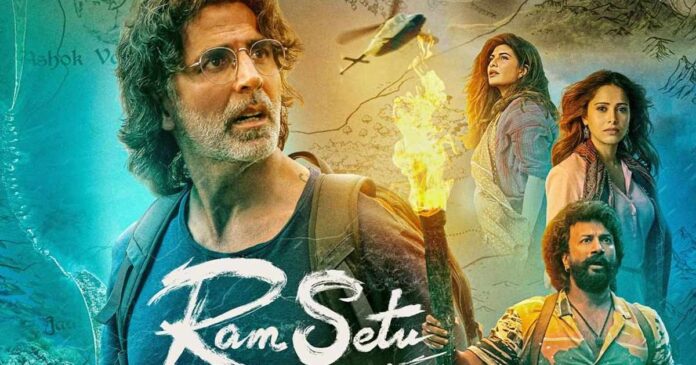 Ram Setu Review: Akshay Kumar as an atheist archaeologist turned into a believer must race against time and find ways to save the epic Indian mythological Ram Setu bridge created by the Vaanar sena of Lord Rama. The movie is an adventure saga that will take you on a thrill ride throughout its narrative that continues to deliver its premise.

Ram Setu Story: An archaeologist is investigating whether the Ram Setu bridge described in the Hindu epic Ramayana is a myth or reality. He comes across striking details and turns into a believer even though he was an atheist before that.

For those who may not know Ram Setu is a bridge that was created by the Vaanar Sena of Lord Rama commanded by Hanuman to build a bridge that allowed Lord Rama to reach Lanka and save Sita Maa from the clutches of evil Ravana.

The archaeologist then faces a grim challenge as he must prove the existence of the bridge before the evil forces destroy it for once and all. Will he be able to save the bridge or not forms the crux of the story.

Akshay Kumar has come up with something fresh after his historical drama Samrat Prithviraj at the box office. The movie is exactly what he needed to bring out the dynamics of his acting skills. He is the heart and soul of this mythological adventure saga. Akshay has done a fabulous job and he must be lauded for that.

On the other hand, Jacqueline Fernandez is finally seen in a considerable role in a movie released in theatres after a long time and she makes a point that she should be considered for more full-fledged roles with her striking performance. South actor Satya Dev is equally impressive in his debut in Bollywood. Lastly, Nushrratt Bharuccha has managed to steal the spotlight with just a limited screen time with her nuanced performance.

The adventure saga’s biggest plus point is that it never turns dull for a moment. The film keeps you engaged with one thing after another sprawling that our heroes have to deal with. However, the below-par VFX is a big letdown and definitely is not everyone’s cup of tea. But storywise the film does well to hide the shortcomings of its technological aspects.

Ram Setu is a fine film that deserves at least a one-time watch in the theatres.

Ranveer Singh attended the SIIMA Awards 2022 this last weekend in Bengaluru. The actor shared pictures from the...
Entertainment

Kuttey is going to release in the theatres on 13th January 2022. The posters of the movie and...
Entertainment

It takes a lot of effort to make a movie or a web series based on historical events...