Kuttey Review: Aasmaan Bhardwaj's directorial debut is a grippy tale that will take you on a thrill ride. 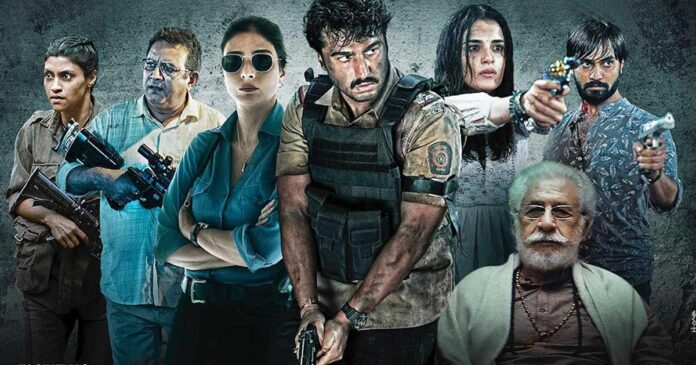 Kuttey Review: Aasmaan Bhardwaj has managed to construct an enthralling tale of greed, twists, cussing and a bit of comedy with perfection. The movie is a perfect masala that has it all.

Kuttey Story: Kuttey, Aasmaan Bhardwaj’s caper, is largely motivated by a common human emotion: greed and the never-ending desire for money. It starts with Gopal (Arjun Kapoor) and Paaji (Kumud Mishra) getting themselves into trouble, their attempt to get out of it – and while they’re at it, fate entraps them with a few more characters and a van loaded with money – which appears to them to be a solution to all their problems.

Do they truly find a way out, or do Narayan Khobre’s (Naseeruddin Shah), Pammi’s (Tabu), Laxmi’s (Konkona Sensharma), Lovely’s (Radhika Madan), and Danny’s (Shardul Bhardwaj) interest and interference lead them all into a fight? Watch the movie to find out!

Kuttey is not your typical crime drama. It’s a well-crafted heist thriller. The movie is divided into three chapters and concludes with an epic epilogue. The character-building formula keeps us interested in the first half of the film, and the second half keeps us on the edge of our seats. The only thing missing from the film is realism, which they make up for with their ‘no logic, only character’ dialogue. If one does not pay close attention to the film, it may appear confusing. The climax, on the other hand, will leave you speechless.

Arjun Kapoor is an excellent choice for the role of a corrupt police officer. With evil expressions and strong body language, he keeps up the good work. Tabu, on the other hand, is the cherry on top. In this one, no one could have played the role of a female cop better than she did. She is fearless, daring, and headstrong. Her raucous dialect and A1 acting abilities are as enthralling as it gets.

Kumud Mishra is the film’s next best thing. He may not say much as Paaji, but when he does, he commands the entire screen. Despite having a very brief role, Konkona Sen Sharma gives the film a great start and end. Radhika Madan, Shardul Bhardwaj, and Naseeruddin Shah are all excellent actors.

Aasmaan Bhardwaj deserves praise for his direction. In his debut as a director, he lives up to his father Vishal Bhardwaj’s legacy. The story of the film, written by Aasmaan and Vishal, is as engrossing as it gets. Farhad Ahmed Dehlvi, the film’s cinematographer, shoots the film in the dark like a pro. A. Sreekar Prasad, the editor, keeps Kuttey fresh and interesting. Vishal Bhardwaj’s music is a joy to listen to.

Ayushmann Khurrana has made a name for himself in the Hindi film industry with his unique movies and...
Entertainment

Acharya, created by Koratala Siva, was one of the most awaited movies of the year due to Mega...