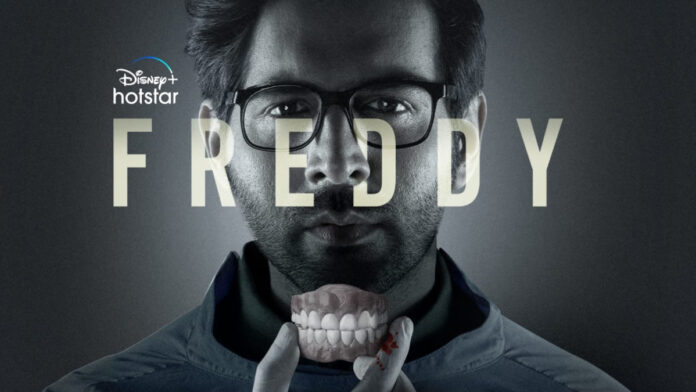 Kartik Aaryan launched the trailer of his upcoming serial-killer thriller Freddy on 7th November 2022. He announced that the film is soon arriving on the OTT platform Disney+ Hotstar. Here we have covered the Kartik Aryan Starrer Freddy Hotstar Release Date, Cast, Story, Budget and More.

The Disney+ Hotstar release date of Freddy featuring Kartik Aryan is scheduled to be 2nd December 2022. The movie is a Disney+ Hotstar original and won’t have a theatrical release. A trailer for the film was released to make its official announcement. The movie was kept under wraps before Hotstar surprised everyone by suddenly revealing its trailer on 7th November 2022.

Freddy will star Kartik Aryan in the titular role. He is playing a dentist who is supposedly a serial killer. Alaya Furniturewala is playing the female lead in the film. Details about her role are kept under wraps. Also, Jennifer Piccinato and Tripti Agarwal are going to play an important role in the thriller.

The movie is a mid-budget thriller. Freddy is made on a budget of Rs 50 Crores. It is financed by Balaji Telefilms Ltd, NH Studioz and Northern Lights Films. Shashanka Ghosh directs this thriller.

The South Cinema trend is currently sweeping the film industry. In such a setting, Indian film is also...