Finally, after months of delay Jersey movie was released in the theatres on 22 April 2022. The film helmed by Gowtham Tinnanuri is a remake of a Telugu film of 2019 of the same name starring Nani. Gowtham Tinnanuri also helmed the original film and returned with Shahid Kapoor and Mrunal Thakur to recreate the magic.

Jersey follows the journey of an ex-cricketer who retired at the young age of 26. However, his son’s wish to own a jersey and his own will to represent the Indian cricket team sets him on a path to rediscover his love for cricket in his 30s. 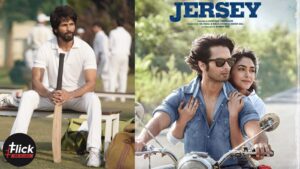 Shahid Kapoor plays the role of Arjun Talwar, a former Ranji cricketer who takes up cricket again to fulfil his and his son’s dream. Mrunal Thakur stars as Vidya Talwar, wife of Arjun, who is the sole bread-earner for the family.

After almost three years, Shahid Kapoor knocks it out of the park in his return to the big screen. The actor is fabulous as a washed-up, desperate and hopeless cricketer who reignites his passion after so many years. Shahid’s connection with his son in the movie is endearing and emotional. The scenes between the father and son will bring tears of joy to your eyes.

Shahid’s camaraderie with Mrunal Thakur in the movie is something that the fans will definitely appreciate. Their distant relationship and Shahid’s turmoil of pursuing his dream even at the cost of his relationship make the dynamic between the couple an interesting and intriguing watch. 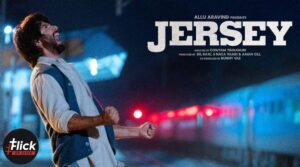 Mrunal Thakur as Vidya Talwar has found ample screen time to justify her talent in this movie. Her hard-working and sensitive nature will make the audience connect and sympathise with her. She hails from a South Indian family but somehow manages to convince her parents to marry her to a Punjabi boy, Arjun Talwar played by Shahid Kapoor. In the first half of the film Gowtham has explored their relationship in detail and Mrunal shines in those scenes.

Ronit Kamra as Shahid’s son is as much fantastic as he was in the original Telugu version. His innocence and emotional bond with his father in the movie is one of the highlights of the film. Veteran Pankaj Kapoor again proves his mettle in the industry by delivering an outstanding performance in limited screen time.

Jersey movie is more about relationships, emotions, family, dreams and passions than cricket. The film might sound like a sports drama but in reality, it explores the hard work and struggles behind someone’s effort to follow his dream. The movie is a bit stretched with almost 3 hours of running time but makes its intention clear in the beginning and stays true to its core.

If the makers have somehow found a way to trim the movie, Jersey could have been even better than it already is. Anyways, book your tickets cause you don’t want to miss out on this beautiful tale.

Varisu Review: Thalaptahy Vijay's stardom is the biggest power of this film; that brings nothing new to the...