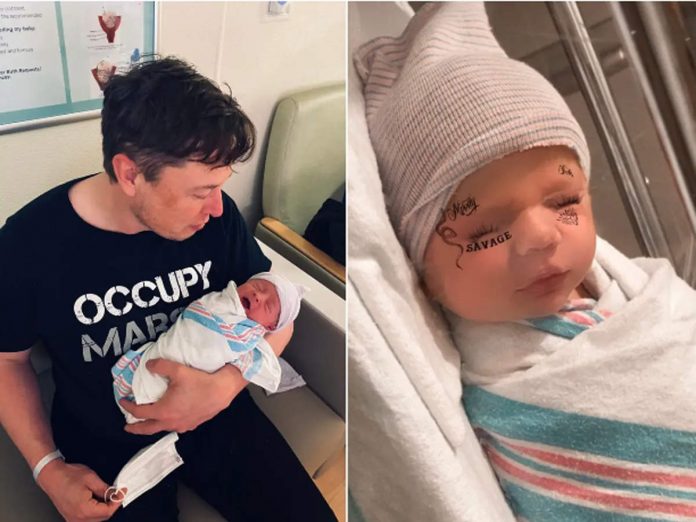 Elon Musk has been in limelight for so many reasons weather its good or bad. Now, he has been blessed with a baby boy but the blessing is something that little guy might need. The reason being that after just being born, he has been turned into a massive meme.


Yes! You might’ve already heard the name of that lucky child, X Æ A-12. Sounds kind of robotic at first and then you get tongue sores trying to pronounce it eventually to fail and give up.

Now, Elon Musk might be a brainiac who has pledged to send a man to Mars and make the electric vehicle industry boom. But everyone’s got to agree that he is not good when it comes to baby names.

His popstar girlfriend and the mother of the child, on the contrary, are on board with the naming of their son. And she also explained the baby’s name with a tweet after all the memes started bombarding her way.

•X, the unknown variable ⚔️
•Æ, my elven spelling of Ai (love &/or Artificial intelligence)
•A-12 = precursor to SR-17 (our favorite aircraft). No weapons, no defenses, just speed. Great in battle, but non-violent 🤍
+
(A=Archangel, my favorite song)
(⚔️🐁 metal rat)

Grimes is a pop star and she has been in fame for the cyberpunk 2077 background score recently. Also, she met Elon while working on the Cyberpunk project as well.

The story was Elon Musk likes to have a vision of Neo Universe (Future universe with flying vehicles, neon lights, and such things) and he likes the depiction of 2077 quite well.

Grimes was there too for she the pop star was hired to produce background score for the same. And their love for similar things glued them together. Also, it was reported that Elon attended Game Awards 2019 just to show support to Grimes as she was awarded for her background score.

He didn’t stop there but then launched a Cybertruck, which was an in-game model from CyberPunk 2077. It was considered as a show of gratitude towards the game and Grimes as well, who was well connected to the project.

Now coming back to the topic, X Æ A-12 Musk might be a very good name for someone whose parents’ life has been quite influenced by the universe of the future. But it lacks in practicality, that’s for sure.

But nevertheless, Netizens have taken it in their hand to take it to Elon Musk and Grimes that they have made a bad decision. Which is why social media is flooded with a ton of gags about the same. And surprisingly, Elon also took part in the action.

When X Æ A-12 heard his name first time . pic.twitter.com/FuexWBPeot

Elon: check the email I sent you

email security: are you a robot?

It’s their own decision on what to name the little cute bun of baby and we hope that he gets a name change for himself in the future. But still, it is what it is and no one should criticize a newborn for no reason of his own.

Its good as long as its funny and the little child is not affected but even as media reporters and someone bringing up memes for the sake of his bread and butter, we should know when to draw the line.

We hope that this is a short term joke only and should not continue when X Æ A-12 grows up to understand what it means.

Previous articleCovid-19 Vaccine’s Development, Claimed By Italy
Next articleList of All The Major Exams Postponed Including JEE-Mains, NEET, and More
Flickonclick

Tom Cruise & Elon Musk plan to shoot a movie in space, an absolutely unusual idea in the...
News

Twitter is said to be in early talks with Elon Musk about selling itself. According to a fresh...
Lifestyle

How Elon Musk Is The Most Influential Entrepreneur, And How Could That Help You?

Elon Musk is the most influential entrepreneur that needs no introduction. Even if you don’t know everything about...
Technology

Elon Musk is one of those influential people who make the headlines very often. And recently he made...
Technology

Elon Musk, CEO of Tesla and SpaceX, is reportedly in the final negotiations with Twitter to complete the...
News

Twitter is said to be in early talks with Elon Musk about selling itself. According to a fresh...
Finance

Tom Cruise & Elon Musk plan to shoot a movie in space, an absolutely unusual idea in the...