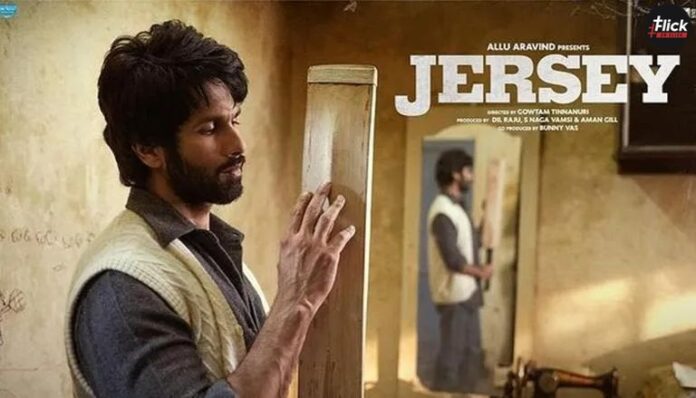 Jersey Staring Shahid Kapoor is gearing up for his big-screen reunion, as the trailer for his upcoming movie ‘Jersey,’ in which he co-stars with Mrunal Thakur, has just been released.

Jersey movie is an Inspiration for those people who have to sacrifice their dreams to fulfill family financial responsibilities. However, despite being a fictional story, the movie covers the true realities of the middle-class boy. The clip shows the actor in a different tone as he plays a Retired cricketer who returns to the sport. During his battle to earn a living, he is seen going above and beyond to fulfill his kid’s birthday request of receiving a jersey.

The emotional nearly 3-minute clip leaves the viewer guessing if Shahid will be capable of turning his career around or if he will continue to avoid his lost goal. The story focuses on hope, dreams, and relationships.

The shooting was completed in December of last year. Far before the trailer debuted, Shahid went openly about the significance of ‘Jersey,’ calling it his ‘greatest filmmaking experience. However, due to the pandemic they have to reschedule the premiere date of the movie

Jersey’s release date has been pushed back a week to 22nd April 2022. The sports drama was originally scheduled to hit theatres on April 14. The movie’s release date had already been moved back to December due to an increase in Omicron illnesses. Even though, It was supposed to be released on December 31st. Pankaj Kapur, Shahid Kapoor, and Mrunal Thakur star in the film.

Jersey movie is a motivation to every middle-class boy who loves cricket:

Jersey movie is created for all cricket aspirants who have to give up their aspirations due to family obligations and start doing a job or business to earn their bread and butter. Although, It is an inspiration to individuals to not allow their ambitions to be jeopardized; instead, stay focused, work hard and smartly, and trust that God will take care of everything else.

Mira Rajput, the wife of Shahid Kapoor, has been known to be an independent woman who does not...
Entertainment

Remakes have become a trend in the industry that one feels safe to follow. Whether it is a...
News

Shahid Kapoor and Mrunal Thakur starrer sports drama Jersey has been postponed again and will now release in...