Whatsapp comes again with a new update ‘disappearing messages’, WhatsApp is the standalone king of the instant messaging domain and why won’t it be, after all, it brings in a new update every now and then to keep being in the game, unlike other platforms.


Now, this time one of the most talked-about features has been adapted by Whatsapp and it’s the ability to send ‘Disappearing Messages’. 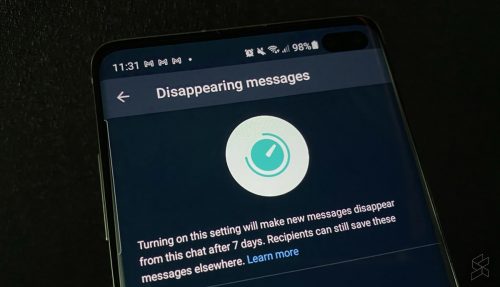 Yes! The concept is quite simple and some might say old too, but when it comes to WhatsApp, it sure has a lot of people swirling their eyes.

The reason being that Whatsapp doesn’t usually push a feature until they’ve tested it to 100 percent of its potential and use case. There is not one thing unnecessary in the Whatsapp application and that’s what makes it stand out.

Now, coming back to the new feature of ‘Disappearing messages’, it works in a very simple way. If the receiver of the message doesn’t open the message for the next 7 days of being sent, it’ll get disappear.

The users can send these kinds of messages to individuals accounts and groups as well. But for the group part, an admin has the ability to do that, no one else.

Moving on, we have no customization when it comes to setting the timeframe of disappearing messages and it’s fixed to a flat 7 day period. This is a bummer for some people and they are looking forward to an update in which the time period can be customized.


This feature will only work for the new chats and would not harm or can be used on the old messages that had already been sent. Also, one can recover the deleted messages if they have it in their backup through the backup and restore feature.


If a media is set as a disappearing message then the media will still be stored on the device of the user, if deleted from the messages.

With this one, we are looking forward to having more new updates from Whatsapp soon and we’ll keep on notifying you as well.