Thor Love and Thunder: Grand Event misses its allure by straining to be overly funny Thor: Love and Thunder have so far gotten favorable feedback from both fans and reviewers. Many individuals flocked to Twitter to express their “awe” at the movie. Others stated they would see it again because it was “wonderful, awesome, and “mind-blowing.” Many people applauded Christian Bale’s portrayal, calling the character “very attractive.”

Thor Love And Thunder, Marvel Studios’ long-awaited feature starring Chris Hemsworth and Christian Bale, has finally come in cinemas. The plot centers upon Thor, who goes in shape and gathers a fearsome team to battle Gorr, the God Killer.

Except for one, Love and Thunder have no grand Thor-ic objectives. When a furious Zeus strips the clothing off Chris Hemsworth, the blond, biceped movie god, what’s below makes spectators scream, swoon, and fall.

Many people, including this reviewer, consider Thor: Ragnarok to be one of the best MCU movies of all time! What the first two Thor pictures failed to achieve, the Taika Waititi-directed feature accomplished with flair: it made the God of Thunder personable and humorous.

Chris Hemsworth returns in Thor: Love and Thunder, with old and unexpected friends and rivals. Despite the anticipated outcome, is the second time the trick for Hemsworth and quirky Waititi’s pairing? Let us look into it!

Thor is going through a midlife crisis in Thor: Love and Thunder, losing practically all of his dear ones, including his dear brother Loki (Tom Hiddleston, who is still living in another timeline!). When evil comes calling in the guise of Gorr the God Butcher’s terrifying phantasm, the God of Thunder’s dad-bod instantly turns into a God-bod (Christian Bale).

Gorr is on a murdering rampage, intending to slay all Gods in retribution for his young daughter’s untimely death.

After Gorr skillfully abducts Asgardian youngsters as bate, Thor sought the help of Valkyrie (Tessa Thompson) and Korg (Taika Waititi) to save everyone for the nth time.

What Thor: Love and Thunder excel at is the emotional aspect, especially when it relates to Jane’s cancer scare and how it impacts her mentally, depleting her body with each stroke of the sled. Thor remarked sadness that it had been “8 years, 7 months, and 6 days” since they had last seen each other. 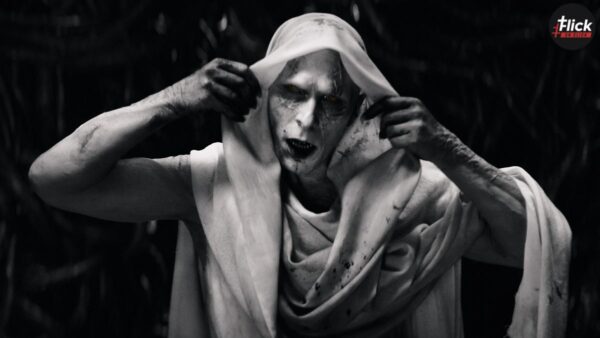 When it relates to talents in Thor: Love and Thunder, Chris Hemsworth as Thor don’t lose a beat, trying to bring back the contagious joy of the OG 6 Avengers that we missed in Marvel Phase 4. Chris’ underappreciated comic timing lends even the most juvenile gags (and there are plenty!) a zany twist.

Natalie Portman, on the other side, gets her attributable in the Marvel Universe, as her Oscar-winning acting skills come in useful in the more serious action scenes, while Natalie exudes pure delight in just being Mighty Thor (as she oddly encompasses her muscle-bound superhero side), which is entertaining to see on the big tv set.

The banter between the two Thors is effervescently amusing, particularly as it relates to the rivalry elements of both their weapons – Mjölnir and Stormbreaker.

Talking of Oscar winners, Christian Bale delivers yet another extremely demanding portrayal as Gorr the God Butcher, despite a muddled narrative that works like a charm. In parts, Bale is terrifying, but the intimidatory ending does not justify the ends.

Particularly when he’s the black clouds amid a rainbow-envy bundle of happy figures. Tessa Thompson stole the show in Thor: Ragnarok, but she’s been pushed to the shadows in Thor: Love and Thunder, with Korg getting more time on camera than her. Don’t misunderstand us: who doesn’t enjoy Korg? But we’d like him a lot better if he was not less than anyone.

Thor: Love and Thunder’s action moments are a riot of hues choreographed by Nigel Phelps’ artistic set design, while Barry Baz Idoine’s superb photography offers the opportunity to marvel at even the overtly-CGI invasion. Thor: Love and Thunder slip into the same trap as earlier Phase 4 outings like Doctor Strange in the Multiverse of Magic, in which Marvel attempted to break away from its severely criticized current quo and ‘experiment’ with its storyline framework. Because of its excessively ambitious, incorrect approach, the Chris Hemsworth-led movie can’t compete with Thor: Ragnarok, but for MCU aficionados. Thor: Love and Thunder might be a home run courtesy of its trusty ensemble. Besides the goats’ screaming, which was amusing for about a moment.

Over the years, Bollywood has made some tremendous growth in its storyline. And has gifted us with some...
News

Amid the novel Coronavirus pandemic taken the globe under its hands, China tech giant Xiaomi is beating strings...
Entertainment

Fauda Season 4 Review: This time, the stakes are higher as Fauda goes deeper with its gripping tale...