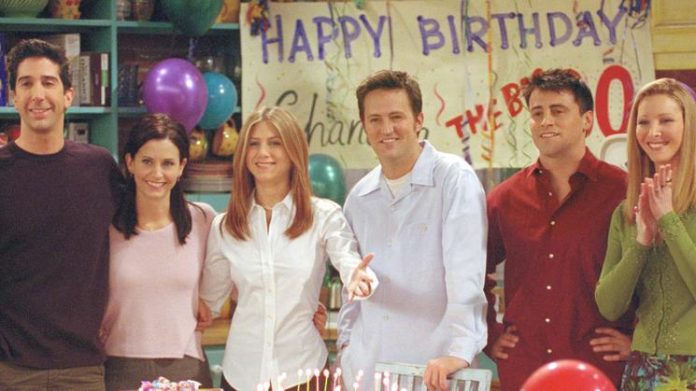 There has been quite a buzz about the possibility of a new friend’s movie from the time Jennifer Aniston posted her first Instagram post in having the whole crew of Friends Tv series. Although, She more or less gave away a hint of work being in progress during her visit on the Ellen Show but refused to clearly comment on the same.

She said upon Ellen’s direct question about any possibility of a reunion that “We would love for there to be something, but we don’t know what that something is. So we’re just trying. We’re working on something.”

Also, Aniston said she posted the selfie because “because we miss each other and we all happened to be in the same part of the world.” She is either not good at keeping secrets or this is all a major way to see how the public will react to the news before deciding on starting any production for the reunion.

The Hollywood Reporter and Variety reported that there are news coming from anonymous sources that the process to make a Friends reunion is underway. Nothing has been fixed yet but there are talks of starting out on the project including the major cast of friends and that it can be aired on HBO Max, a unit of AT&T’s Warner Media.
HBO Max has recently purchased the rights for all the seasons of Friends and will start airing the show from the year 2020 when they start their streaming service.  Previously, Netflix has the rights for Friends and it rose up to become the second most-watched show in 2018, claiming its significance amongst the tsunami of content that is out every second.

There is so much to work on and if the Friends reunion project gets shipped then we can expect the movie in about a year from now on. The buzz from the slight hint of even a possibility of a reunion had made the Friends fandom crazy and they are flooding the social media with requests for confirmation and in hope for insights every day.
Along with fans, Big media houses are going crazy by the news too and they share equal blame for flooding the social media especially Twitter with the same news. Take a look at what’s going on Twitter these days.

They'll be there for you… again. A #Friends reunion special – featuring Jennifer Aniston, Courteney Cox, Lisa Kudrow, Matt LeBlanc, Matthew Perry and David Schwimmer – is in the works at #HBOMax. Get all the details: https://t.co/T56utiDuC9

'Friends' reunion special in the works with all six original cast membershttps://t.co/47xVjDwrlg pic.twitter.com/rPTY8tb5jw

There have been rumors for the reunion project previously also and some of them even go as far as making a trailer for the same using each Individual actor’s scenes from their different projects. But the news seems real this time and well! our favorite Rachael started it so where is the scope of doubt this time?