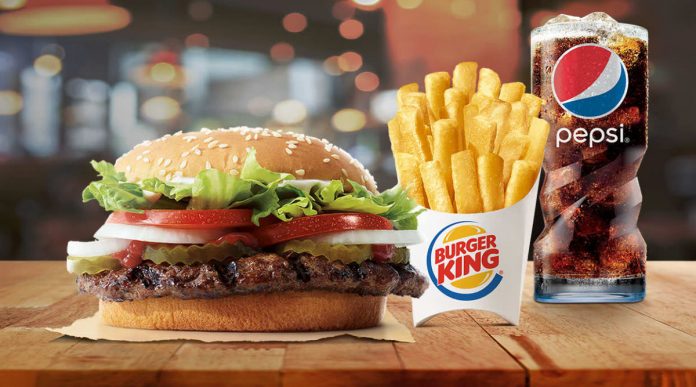 Burger King is known for its marketing strategies and it’s amazing ad campaigns. They have very talented people at their camp making sure that they remain under the limelight for some reason or the other.


Now, apart from their usual banter over the internet platforms with other competing brands. Which is quite fun to watch, truly saying. Burger King has done something totally different this time.

We know, we never thought we’d be saying this either. pic.twitter.com/cVRMSLSDq6

They are asking users not just to eat at their store but mentioned quite a few names such as Mcdonalds, Pizza Hut, Dominoes, and more, where one should eat. They are taking this front due to the covid outbreak which has broken the back of many industries including the food and beverage industry as well.


ALSO READ: 7 Reasons Why You Should Stop Eating Momos Frequently

The messages read “We never thought we’d be asking you to do this, but restaurants employing thousands of staff really need your support at the moment,” read the tweet, which names KFC, Subway, and Domino’s Pizza, as well as other chains.”


It continues “So if you want to help, keep treating yourself to tasty meals through home delivery, takeaway, or drive-thru. Pizza Hut, Five Guys, Greggs, Taco Bell, Papa John, and Leon also get a mention, as do independent food outlets. Getting a Whopper is always best, but ordering a Big Mac is also not such a bad thing”

Now, if you read the message, it is craftily written, and while it depicts the ideas of union and harmony. It shows a sense of pride in Burger King that it is still getting too many customers and doing okay in the times of COVID that, it has customers to divert away to different brands.


This is an amazing type of marketing campaign where they maintained superiority and a good front all at the same time. Once again, Burger King has taken a lead when it comes to good marketing tactics.

China who is the epicenter of the whole Coronavirus pandemic gave approval to a Nasal Spray COVID-19 Vaccine...
Fitness

Every day when we're experiencing the increase in number of COVID cases we should not forget about the...
Fitness

Masks have become a part of our lives but we can't ignore the side effects of wearing a...
Finance

Jio by Reliance involves itself into community service and CSR. Given the current scenario of Corona virus pandemic,...
News

Unlock 5.0 is going to be instated from today onwards and there are some new rules and SOP's...
News

The IPL 2021 which was being operated under the Covid-19 bubble has to seek some options now due...
News