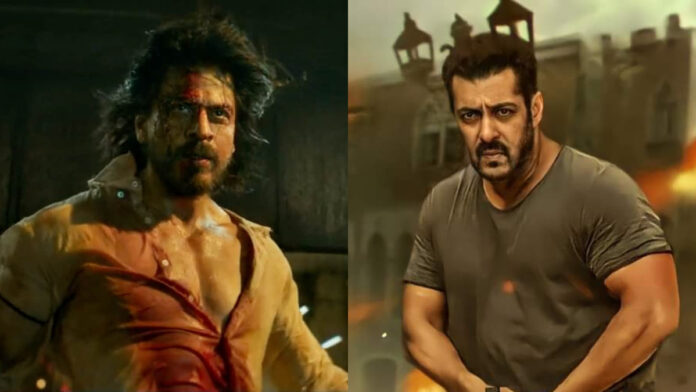 Fans of Shah Rukh Khan and Salman Khan will cherish 2023 fondly. The actors’ two most anticipated flicks, Pathaan and Tiger 3 will be released the following year. The most intriguing aspect is that the actors appear in each other’s movies. According to a report, Shah Rukh will begin filming Tiger 3 after Pathaan is completed.

Shah Rukh Khan will begin filming Tiger 3 immediately following the release of Pathaan, confirming his participation in the Tiger franchise. In Aditya Chopra‘s espionage world, the routes of SRK, Salman, and Hrithik will continually cross to build to the secret universe’s dramatic climax.

While Salman is set to appear in Pathaan, SRK will now appear featured in Tiger 3, and an extended shooting plan is being prepared to shoot this thrilling segment right following Pathaan’s release on January 25, 2023, a report stated.

Pathaan and Tiger team together for a climactic scene:

According to reports, This will be a hugely built action scenario where Pathaan and Tiger come together for a particular key scene. This will also be a memorable cinematic moment for viewers. The espionage world is proving to be wonderfully exhilarating because it pulls together the biggest celebs in riveting, edge-of-your-seat episodes that are necessary for the plot to progress.”

Pathaan is directed by Siddharth Anand and features Deepika Padukone and John Abraham in major roles. It will be released in cinemas on January 25. Tiger 3, on the other end, Salman’s debut Tiger 3 will be released on Diwali 2023. It symbolizes Salman and Katrina Kaif’s comeback.

On November 2, the promo for Shah Rukh Khan’s Pathaan was revealed on the actor’s bday. The superstar commented on the post, saying, Pathaan Teaser out now! Apni kursi ki peti bandh lijiye. Enjoy Pathaan with YRF50 on January 25th, 2023, only on a big screen near you. The film will be released in Hindi, Tamil, and Telugu (sic).

Tiger 3 was formerly expected to be released on Eid 2023. It was later rescheduled, although. Salman Khan then announced the new release date on Twitter, writing, “Tiger has a new date… Diwali 2023 it is!” Only on a huge screen near you can you celebrate Tiger 3 with YRF50. The film will be released in Hindi, Tamil, and Telugu, and stars Katrina Kaif and Maneesh Shama in major roles.

Read More: Pathaan Box Office Collection Prediction: How Much Will It Earn?