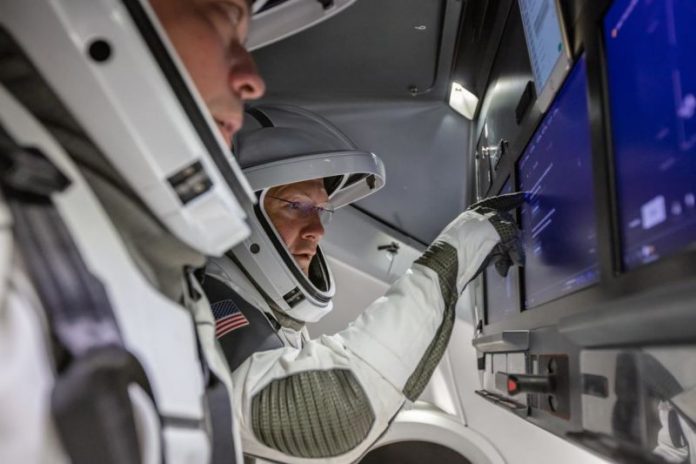 Two NASA astronauts completed SpaceX Dragon Splashdown, high-speed journey back from the International Space Station on Sunday, splashing down in calm Gulf of Mexico waters after 45 years. The splashdown closes down an unprecedented test flight by Elon Musk’s SpaceX company.

The two astronauts Bob Behnken and Doug Hurley rode the SpaceX Dragon capsule “Endeavour”. They left the ISS at 7:35 p.m. ET Saturday evening and orbited Earth at 27,358 k.p.h. Then after a proper entry, the crew floated down with a quartet of parachutes and splashed at 2:48 p.m. ET on Sunday.

“On behalf of the SpaceX and NASA teams, welcome home and thanks for flying SpaceX,” mission control radioed to the spacecraft after it landed. Astronaut Hurley’s safe landing was confirmed with his response, “It’s truly our honor and privilege. On behalf of Dragon Endeavour, congrats to NASA and SpaceX.”

The maneuver was the first splashdown by US astronauts in the last 45 years, with the first commercially built and operated spacecraft to carry people to and from orbit. The last time when any space flight splashed down in the water was the Apollo-Soyuz, a joint U.S.-Soviet mission in 1975.


Amid the turmoil of the Coronavirus pandemic and the death of civilian George Floyd, the launch faced numerous hurdles to stumble upon. But among all these setbacks, SpaceX CEO, Musk, has safely carried out the responsibility of getting the astronauts back to their families.


ALSO READ: How and When To Watch The Now Visible Comet Neowise

Interesting Facts About the NASA-SpaceX Splashdown

ALSO READ: Tom Cruise And Elon Musk To Shoot A Movie In Space

Jolly news for tech lovers. It’s time to jump off your seats because the OnePlus 9RT launching date...
News

It would be a sign of disrespect if you haven’t paid attention to this premium device presented by...
Technology

Elon Musk is one of those influential people who make the headlines very often. And recently he made...
Technology

Google Pixel 4a, which has been a much talked about the device already in the mobile markets of...
News

Elon Musk, the CEO of Tesla is set to launch in India in 2021, as confirmed by Nitin...