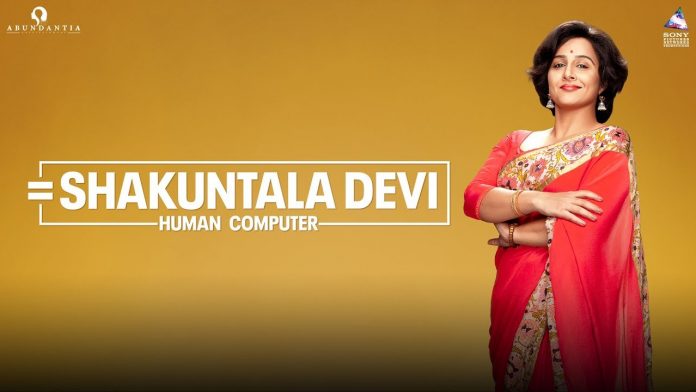 Vidya Balan starring “Shakuntala Devi” has been released on Amazon Prime Video. The movie, as it goes, is all about the meaning of how women empowerment faces severe challenges. How one perceives their drawback, disabilities and converts them into a catapult for their career.


Directed by Anu Menon (Four More Shots Please) “Shakuntala Devi” introduce you to the life of a mother who is balancing on a thin rope in between her career and the newly introduced motherhood. As we see, the film is wrapped in a flashback story from her daughter’s perspective.

The movie starts as the sharing of glimpses of the young life of Shakuntala Devi (Balan). She is gifted with an extraordinary gift of solving rigorous mathematic problems in a matter of moments. Unlike other children of her age, Shakuntala seems to be different, both as a person and with her background.

This talented girl belongs to an inferior poor family in a village of Bangalore. And while ignoring all aspects of social stereotypes and jeopardizing her family’s security. Shakuntala starts earning at a very young age by doing math shows around her village and focusing on what she wants from life.

As the story graduates, our leaders managed to suffice what it was required to work out the family needs. But in between a tragic demise and having her “special” talent. Shakuntala chooses to wipe her tears and plans to move forward to the U.S to narrate her talents on a bigger platform.

With her witty nature and eagerness to compete with anyone, this young girl is portrayed as the fastest mathematician that even earns her the tag of “Human-Computer”. Exploring foreign grounds with her talents, Shakuntala meets businessman Paritosh Banerjee (Jisshu Sengupta) from Calcutta.


They both cling upon personal interests and eventually her focus shifts to making a family. Even after living with the love of her life, in her normalcy and the newly born daughter, Shakuntala feels something to be missing from her life. It was the exposure to her world of maths (or fame).

From here onwards, a different tone sets to make in the movie which signifies her relationship with her daughter, all while coping with her long lost fans and competition. Thus begins the family drama movie which could be expected from most Indian viewers.

Director Anu Menon, who has managed to bring life to Shakuntala’s character and has made sure that the audience never forgets that Shakuntala is a maths genius. But despite all her “Manly” spirit, she also portrays our lead to be a vulnerable mother who also wants to have nice bonding within her personal life.

As the movie moves forward, many of us may find the movie to be fast-paced storytelling. While the movie is short and simple, this fast narration became both, a favor and the drawback of the film. And despite all these factors, Balan did manage to steal the limelight from all the shortcomings.

She portrays the life of every phase of the life of a woman: young, teenager, wise adult, fearless middle-aged, and a caring mother. Vidya has confidence, humorous, and charming nature. It added with her strong precision of every phase is what makes the obvious narrative appealing.


Supporting character including Sanya Malhotra’s simple problem of every adult with their parents: conflicting mindset and building a path of trust and connection. Amit Sadh and Jisshu Sengupta also do a good job. They bring an impact on the story with their brief appearances.

Overall, the movie is a sweet, simple, and integrating part of admiration, career, goals, and the supportive nature of the Indian parents. Shakuntala Devi is a movie that is worth watching with your parents and enjoying a good weekend during the lockdown.