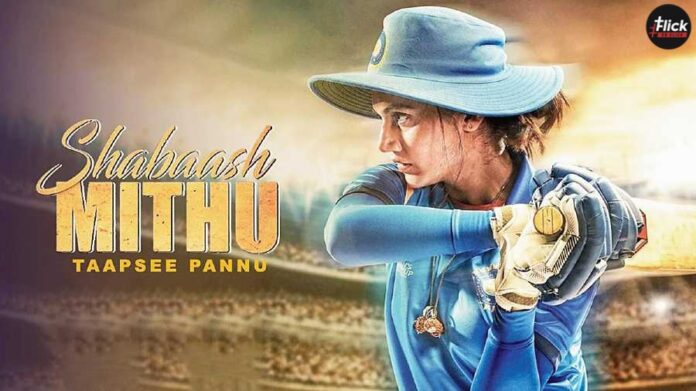 Shabaash Mithu, one of the most awaited films of 2022, was teased today by Viacom18 Studios. The uplifting tale of Shabaash Mithu, starring Taapsee Pannu, is based on the true story of Mithali Raj, the rising star in Indian cricket. Additionally, the film tells the narrative of Mithali Raj, an Indian skipper who keeps breaking world records.

The teaser showcases Mithali’s accomplishments, and the film captures her life’s peaks and valleys, as well as times of pleasure. Vijay Raaz, a brilliant actor, will also play a major role. Ajit Andhare is the Artistic Producer of Shabaash Mithu. Moreover, the movie is produced by Srijit Mukherji and scripted by Priya Aven.

Taapsee posted the teaser on Instagram with the description, “In this Gentlemen’s sport, she did not bother to rewrite history …. instead, she created HER STORY! #AbKhelBadlega #ShabaashMithu Coming soon! #BreakTheBias #ShabaashMithu #ShabaashWomen #ShabaashYou.”

Viacom18 Studios also revealed the movie’s trailer premiere on Instagram with the remark, “In a sport dominated by Gentlemen, she did not bother to rewrite history… Instead, she created HERSTORY! #AbKhelBadlega #ShabaashMithu Coming soon!” Shabaash Mithu is a coming-of-age narrative about women’s cricket in India as seen through the eyes of India’s most accomplished female cricketer. “It will document Raj’s life’s ups and downs, failures and moments of euphoria,” according to the film’s official summary.

The film, scripted by Priya Aven, began filming in April in Mumbai and was completed last month. Some scenes in the film were shot at London’s famed Lord’s Cricket Ground.

Significantly, Veteran actor Vijay Raaz will play a pivotal part in the film. Hence, the biopic film is produced by Viacom18 Studios and directed by acclaimed Bengali filmmaker Srijit Mukherji.