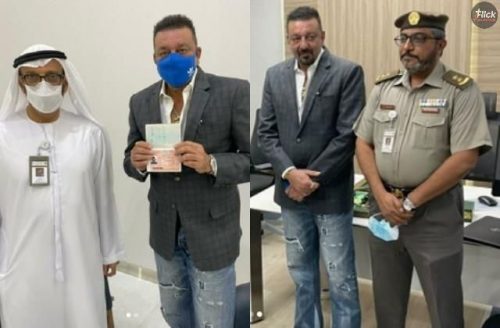 It was a prestigious moment as other than Bollywood actor Shah Rukh Khan, Sanjay Dutt, who is residing in Dubai with his family, also received a golden visa for the UAE on May 26, 2021. And the minute he got the golden visa, he immediately took this to social media and shared pictures of holding it with his two hands.


Sanjay Dutt was honored to receive a golden visa for the UAE and was also seen thanking Major General Mohammed Al Marri, Director of GDFRADUBAI, for helping to make this possible. He also thanked the UAE Government for this prestigious honor and also expressed his gratitude to Mr. Hamad Obaidalla, COO of @FlyDubai for his immense support. 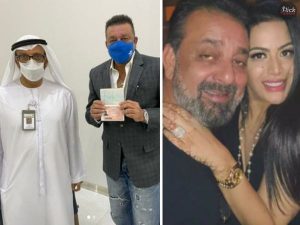 Fans couldn’t stop themselves as the comment section flooded with congratulatory messages. But it was his daughter Trishala Dutt’s comment that draw everyone’s attention. Her sweet comment must have melted her father’s heart as she wrote, “You look amazing Daddy!! I love you.”

A day earlier, Sanjay Dutt was found congratulating Sheikh Hamdan Bin Mohammed Bin Rashid Al Maktoum, Crown Prince of Dubai and Chairman of the Dubai Executive Council, on the birth of his twins.


Dutt has been regularly visiting Dubai with his family and now has become a regular visitor. Recently the Dutt family celebrated Eid in the UAE and the actor too posted pictures of his family enjoying the city on his social media.

He further told news agency IANS, “It is an honor for me that I am receiving this prestigious golden visa. I am highly grateful to the UAE government for their continuous support considering Dubai became a home for my family in the past year.”

“The Golden Visa initiative by the leaders is truly visionary and it has helped the country grow as an investor-friendly nation and I surely hope that it would like to continue to do so in the coming future. It is my duty to help the country whenever a need is required because this is what humanity is, to help each other grow.”

What is a Golden Visa?

Many of you must be aware of a visa, but what about a Golden Visa. What is it and why it has so much importance?

Actually, A Golden Visa refers to the immigration program which allows wealthy or rich individuals to get citizenship in another country simply by making a large investment or donation or by purchasing a land/property.

Earlier it was only given to investors and businessmen people, but not the eligibility was broadened to cover Ph.D. degree holders, doctors, engineers, highly qualified individuals, researchers/scientists, and artists/actors too.

If you are wealthy enough to make such investments and apply for the Golden Visa, then you and your family members will become legal residents of that nation. After becoming a citizen of another country, you can start living over there, go to school, and can also get access to healthcare.

Which countries have Golden Visa?

Here is the list of countries that offer Golden Visas:

Which actors in India have a Golden Visa of the UAE?

Other than Shah Rukh Khan, Sanjay Dutt is the second Bollywood actor who managed to get a Golden Visa of the UAE.

Things You Need To Know Before Planning Your Next Bali Trip

If you're a travel junky, then it's highly likely that you're having 'Bali' as your bucket list destination....
Entertainment

KGF Chapter 2 by Prashant Neel is a terrific action flick that upholds the fans' expectations with its...
Lifestyle

On November 26 2021, the World Health Organisation revealed the outbreak of new coronavirus variant, B.1.1.529, named...
Entertainment

Samrat Prithviraj Review Punchline: Akshay Kumar and Manushi Chillar's chemistry is at the heart of this story of...
World News

The implementation of new regulations will be in effect from October 4, 2021. There could be a simple...
Lifestyle

How does the idea of getting a green card/citizenship for another country sound like to you? Does it...