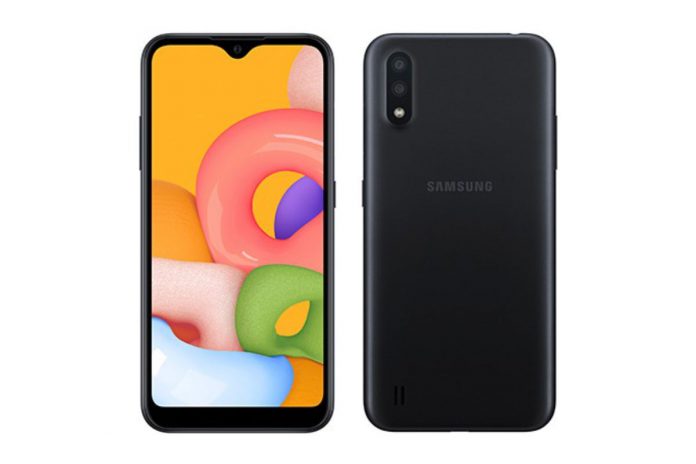 Korean smartphone giant Samsung has launched its latest Galaxy M01 in the Indian market with a discounted price of Rs 8,399 on Amazon India. Under the new discount, the phone will be available to buy on the e-commerce website from August 18.


The new Galaxy M01 is the latest smartphone segment in the popular Galaxy M-Series of the company. Alongside the Galaxy M01, Samsung had also launched the Galaxy M11, which is a mid-range phone, early in June.

The Galaxy M01 comes with a single variant that gets 3GB of RAM and 32GB of internal storage. Amazon has not mentioned if the new discounted price is a limited period offer or will be available for a longer time for the customers.

The Samsung Galaxy M01 comes with a 5.71-inch HD+ TFT Infinity-V Display panel that sports 720×1560 pixels resolution and hosts an aspect ratio of 19.5:9 on the screen. Under the hood, the phone will be running on Octa-Core Qualcomm Snapdragon 439 processor.

The phone delivers a strong 3GB of RAM that will be paired with 32GB of onboard storage. Whilst a single storage option, the internal capacity can be expanded via a microSD card for up to 512GB. The phone also ships with One UI 2.0 on top of Android 10.


In the hardware, the phone houses a strong 4,000mAh battery but will be missing out on support for fast charging. In terms of connectivity, the handset supports 4G VoLTE, Wi-Fi, Bluetooth, GPS/ A-GPS, and FM radio, micro-USB port, and 3.5mm headphone jack.

Specifications at A Glance

The Samsung Galaxy M01 will be available in  Black, Blue, and Red colors. Despite the launch price of Rs 9,999, the new discounted price of the new Galaxy M01 is kept at Rs 8,399 and will be made available on Amazon from 18 August onwards.

Google has recently kicked off its open beta test of Android 11. The beta test came into effect...
Technology

Samsung Galaxy laptops are known for their cutting-edge technology and high-end features that you may not find with...
News

Google Pixel 5 is the latest flagship from the conglomerate and they are currently shipping it out as...
World News

The season for the launch of the new android smartphone is here and with big sales from Amazon...
News

Samsung Galaxy A02 Launched in India: Specifications and Price

January 28, 2021: Everyone anticipated the launch of Samsung Galaxy A02, and the wait is finally over! This global...