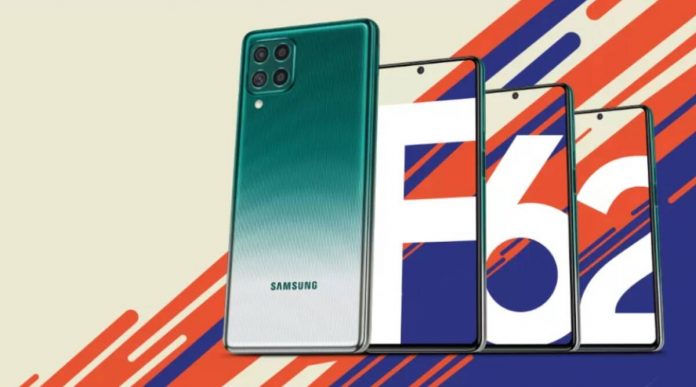 Samsung has launched another F-series mobile named Samsung Galaxy F62 in India through a Livestream. The company did launch the latest model – Galaxy F41 in F-series in October last year and was very well-liked by many Android lovers. The company is comparing its new Galaxy F62 with other company’s products like OnePlus Nord, Realme X3 SuperZoom, and the Realme X7 5G, and claiming that it stands out in front of these models at such a fair price.

It comes with offers like customers will be rewarded Rs. 3,000 cashback on recharge discount coupons and Reliance partner brand coupons worth Rs. 7,000 for Jio customers. Another cashback offer ICICI bank cards and EMI has also been announced of worth Rs. 2,500.

Connectivity options include Wi-Fi, NFC, USB Type-C 2.0, Bluetooth v5.0, GPS/A-GPS, and a 3.5mm jack. When it comes to sensors, then it is provided with a fingerprint scanner (side-mounted), accelerometer, gyro, proximity sensor, and compass. Samsung Galaxy F62 has a non-removable Lithium-Polymer battery of 7000mAh that supports 25W fast charging that is touted to take less than two hours to fill the entire capacity.

Samsung is coming up with another one of its mid-ranger beasts and with that, they also started a...
Technology

Are you thinking of buying a new phone? Well, if that is the case then there is a...
Offers

During the 1950s, televisions became the primary medium for influencing people and a medium of enjoyment as children...
Fitness

Samsung has released its fitness band, Samsung Galaxy Fit 2 just one month back in an event called...
Technology

Finally, the Samsung Galaxy S20 FE 5G has launched in India. Earlier, the device was said to launch...