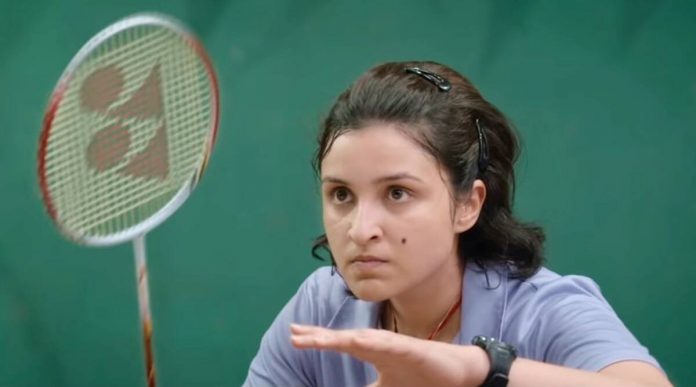 Saina Movie Review– Victory demands great sacrifices and this is what Saina Nehwal has proven. A Haryanvi girl whose only aim was to be a world no. 1 women’s singles badminton player and after going through many hardships and sacrifices she made her parents and the whole nation proud. “Saina” is a great biopic of an Indian badminton player – Saina Nehwal, that takes you on a struggling journey of a young girl, featuring Parineeti Chopra (Saina Nehwal), Manav Kaul (Pullela Gopichand), Paresh Rawal (Saina’s Father), and the film is well directed by Amole Gupte.

Saina mainly focuses on the downfall of the Indian shuttler and how she trained hard to get back on the court and won more titles after her fatal injury, all the criticism she had to face from all her fans, etc. It was always Saina’s mother who always acted like a backbone of her in her good and bad moments. It was her ambition to see her daughter bringing a medal for the nation one day. Her support and sacrifices for her daughter turned those dreams into reality.

In the movie, Saina’s mother could be seen emphasizing the importance of becoming the world no. 1 because according to her in the world of sports, there is no place for those who come second, for her being no. 1 is everything. Later Saina is comforted by her father who tells her why winning is important for his wife. That level of expectation from a teenage girl can easily shake her up but Saina chose to remain determined on her dream and kept her head and racquet higher.

The director’s artistic approach and brilliance at working with children drew the public’s attention. The director shared his experience and said, “I really enjoyed working with Mumbai’s talented 10-year-old shuttler Naishaa Kaur Bhatoye (young Saina) and I have never seen a disciplined sportsperson myself in my entire life.” Actually, she resembles younger Saina really much and her mastery of the game gave the film an edge. Gupte smartly utilized the energy of this young star and the results could be seen on the screen.

And how we can forget Parineeti Chopra, who has done a great job in the biopic, still having no sports background. She is a commendable actress who understood the game and its technique in such a short span of time, after all, it is really difficult to be in someone else’s character. Not only acting, but the film also delivers fabulous songs from Amaal Mallik and Shreya Ghoshal that will definitely make you add them immediately to your playlist.

Under Amole Gupte’s superb direction, the film takes you on Saina’s struggling journey as her road to world domination wasn’t wobbly. Her parents very supportive from the beginning and now after getting married, her husband Parupalli Kashyap is her backbone. Still, she hasn’t decided when to quit and looking forward to bring a medal for the nation in Olympics.

Also Read- Bollywood Is Back With Its Horror Thirst: The Wife Movie Review.

Previous article
The Mystifying Crime Show Asur Is Back With a Season 2: Release Date, New Cast, Plot and Everything You Need to Know About It.
Next article
The Vampire Diaries: Stefan’s Love Interests, Best Characters of All Time
Flickonclick

In Week 1, the Hindi version of RRR surpassed the Bahubali blockbuster's lifetime box office. RRR made a...