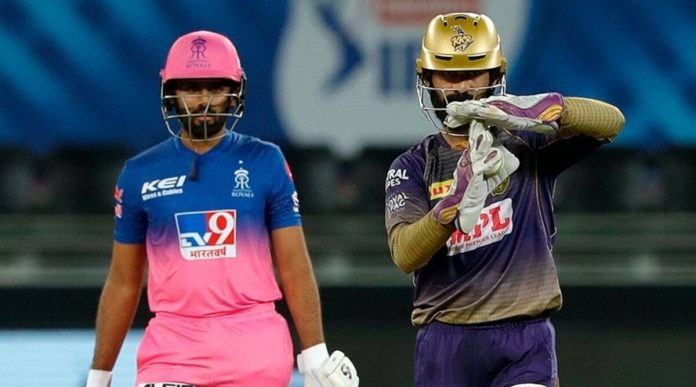 In yesterday’s match between KKR and Rajasthan Royals, the latter won the game with 6 wickets.

With that said, The Rajasthan Royals jumped to the 6th position on the IPL Pool table and KKR resorted to the last position.

Sanju Samson, the skipper of Royals chose to bowl first, and with that appeared, Nitish Rana and Shubman Gill on the field to start the KKR innings.

With a good bowling spell, the Rajasthan was keeping the Knight Riders quite strained in their batting. And in the 6th over, with the wicket of Gill, Riders started to fall.

Nitish Rana was soon sent back to the pavilion as well in the 9th over with 22 runs in 25 balls.

Sunil Narine and Eoin Morgan were also just guest on the pitch and were sent back in no time with the score of 6 and 0 respectively.

Rahul Tripathi along with Dinesh Kartik showed some spirit in the middle overs. But Tripathi was sent back while trying to hit hard and handed the ball straight to Riyan Parag.

He then smashed a selfie as well with the bowl, making it a meme fest on the internet. 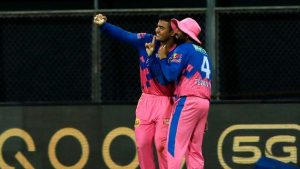 Not very long after, Dinesh Kartik also got back into the dressing room at a score of 25 runs on 24 balls but with 4 fours.

For Rajsthan, Jos Buttler and Yashasvi Jaiswal started their innings. With Buttler being calm and Jaiswal on the hitting side, they started well. But they both were sent back soon at a score of 5 and 22 respectively.

Then came the skipper, Sanju Samson, who dragged a good amount of scores onto the board.

Along with him, Shivam Dube and David Miller also chipped in their contribution with 22 and 24 runs individually.

Samson ended the match with his shot but was left very close to a half-century as he was not out with 42 runs on 41 balls.

The Royals registered their victory after a very long time and KKR lost again, which has become kind of a ritual from the last four matches.

Moving onto today’s match between CSK and RCB, there’s such a huge buzz. Yes! Unlike yesterday’s match where two of the least scoring teams were battling, today is the day for the champions.

With RCB having a clean sheet of victories and CSK following up with just one loss, it’ll be exciting to see who wins today.

If CSK is to win today, they’ll be claiming the top position with the same Points but having more net run rate than RCB in the table. And if RCB wins they’ll be continuing their winning streak.

Sunrisers have been one team with a good lineup but they were not getting wins after doing a...
News

IPL 2021 Results- Rajasthan Royals won over with 3 balls still left in the game while they were...