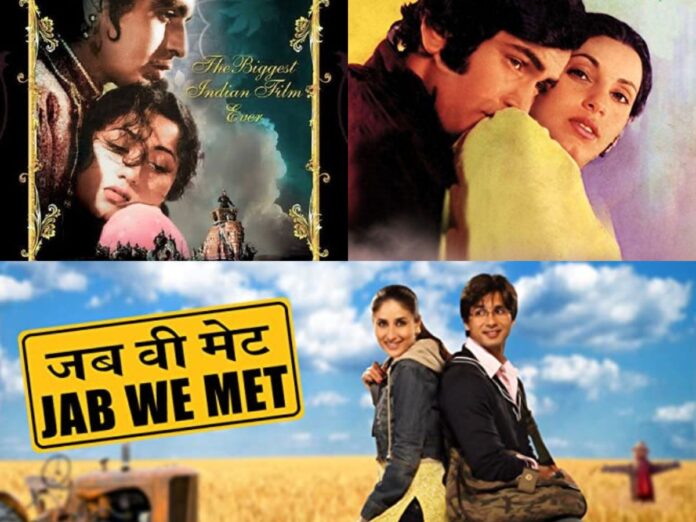 Somewhere deep in our souls, we like the happy endings of any love story. Bollywood has given us many romantic films with dream sequences. They are been made available for viewers on OTT platforms. Romantic movies are always a heal to happy as well as heartbroken people.

They have the power to bring smiles as well as tears to audiences while watching them. But still, Romantic movies are the most watched genre in films after Thriller and Mystery.

Indian historical film directed by K.Asif. It stars Prithviraj Kapoor, Dilip Kumar, and Madhubala. The story revolves around Salim and Anarkali who fall in love with each other. Salim’s father, Akbar disagrees with the relationship between them. This causes disputes between them.

Indian musical romance film directed by Raj Kapoor. It stars Rishi Kapoor and Dimple Kapadia as the lead. The story revolves around two teenagers Raj Nath (Rishi Kapoor) and Bobby Braganza (Dimple Kapadia), who fall in love with each other. Ram Nath (Raj Nath’s father) and Jack Braganza (Bobby’s father) disagree with this love affair due to differences in their status. But later, the issue gets sorted and both have happy endings. 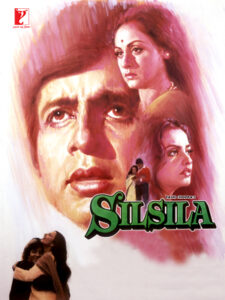 Silsila comes in the list of the top romantic bollywood movies acted by Amitabh Bachchan. It was directed and produced by Yash Chopra. It stars Amitabh Bachchan, Jaya Bachchan, and Rekha as leads. The story revolves around Amit Malhotra (Amitabh B) who falls in love with Chandani (Rekha) but gives up on his desires when circumstances make him marry his brother’s pregnant fiance, Shobha (Jaya B). Later, both of them decide to live happily with their life partners which depicts an epic love story. 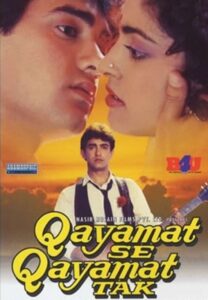 Hindi musical romance film directed by Mansoor Khan starring Aamir Khan and Juhi Chawla. The story centers around Raj (Aamir Khan) and Rashmi (Juhi Chawla) who fall in love with each other despite having family rivalries. The plot involves tragic ending setting twists in love. 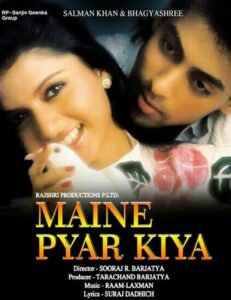 Salman Khan and Bhagyashree starred in Maine Pyar Kiya one of the most iconic romantic Bollywood movies directed by Suraj. The story is about the two lovers Prem (Salman Khan) and Suman (Bhagyashree) who are separated due to family disputes. It involves a sweet twist when the family gives them a last chance for Prem, to prove his love for Suman. 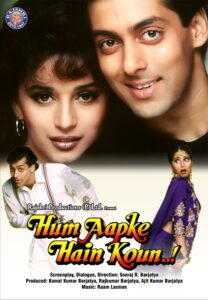 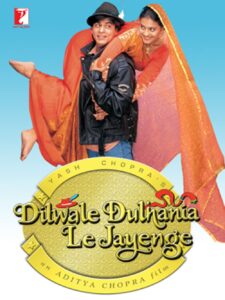 Hindi romance film directed by Aditya Chopra which stars Shahrukh Khan, Kajol Devgan, and Amrish Puri as leads. The story is about Raj (Shahrukh Khan) and Simran (Kajol Devgan) who fall in love with each other after their trip to Europe. Simran’s father (Amrish Puri) disagrees with their affair, but later he lets them start a happy life together ahead. 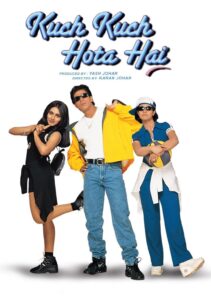 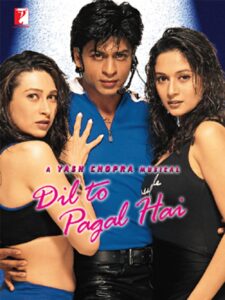 Hindi musical romance film directed by Yash Chopra which stars Shahrukh Khan, Madhuri Dixit, Karishma Kapoor, and Akshay Kumar as lead cast. The story revolves around Rahul (Shahrukh Khan) and Pooja (Madhuri Dixit) who are attracted to each other. It involves a tragic twist when Nisha (Karishma Kapoor) and Ajay (Akshay Kumar) are involved in their lives. 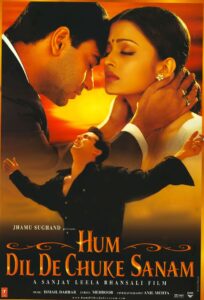 Hindi musical romance film directed by Sanjay Leela Bhansali starring Salman Khan, Aishwarya Rai, and Ajay Devgan as the lead. The story revolves around Sameer (Salman Khan) and Nandini (Aishwarya Rai) who fall in love with each other. But Nandini gets married to Vanraj (Ajay Devgan) who helps them get back together. 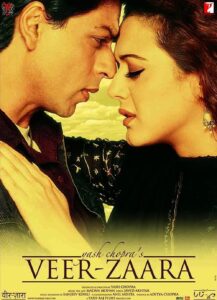 Hindi periodic romantic film directed by Yash Chopra stars Shahrukh Khan, Preity Zinta, and Rani Mukherjee as leads. The plot revolves around Veer (Shahrukh Khan) and Zaara (Preity Zinta) who fall in love with each other despite India-Pakistan disputes. He spends his life in Pakistan prison, whereas Zaara is unaware that Veer is alive. 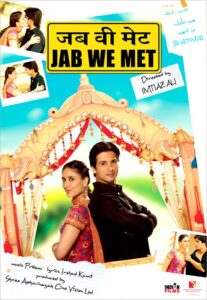 Jab We Met comes on the list of best romantic movies in Bollywood. The film is directed by Imtiaz Ali starring Shahid Kapoor and Kareena Kapoor as the lead. The story is about Aditya Kashyap (Shahid Kapoor) who is a heartbroken businessman and Geet (Kareena Kapoor) who runs from home to get married to her boyfriend, Anshuman. Unknowingly, Aditya falls in love with her. Jab We Met is one of the top romantic Bollywood movies of all time.

Jodha Akbar is a Hindi historical romantic film directed by Ashutosh Gowariker. It stars Aishwarya Rai and Hrithik Roshan as leads. The story is about the increasing attraction and love between a Rajput princess, Jodha, and Emperor Akbar. 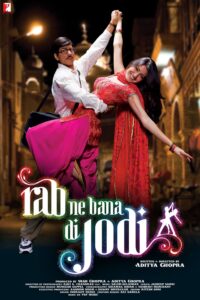 Rab ne Bana di Jodi directed by Aditya Chopra and starring Anushka Sharma and Shahrukh Khan. The plot revolves around Surinder (Shahrukh Khan), who undergoes a makeover to impress his wife, Tani (Anushka Sharma). With days, Tani starts getting attracted to him. 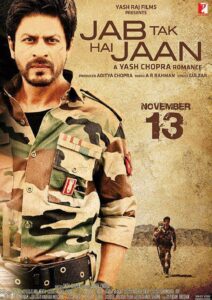 Bollywood romantic movie directed by Yash Chopra. It stars Shahrukh Khan, Anushka Sharma, and Katrina Kaif as the lead cast. The story revolves around Samar (Shahrukh Khan) and Meera (Katrina Kaif) who love each other. Later, Journalist Akira (Anushka Sharma) falls in love with him but decides to bring Samar and Meera together again. 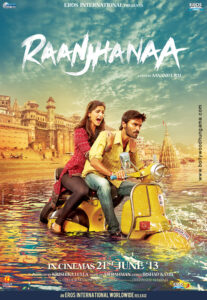 Raanjhanaa is a Bollywood romantic drama film directed by Aanand L Rai. It stars Dhanush and Sonam Kapoor as the lead cast. The plot revolves around Kundan (Dhanush) who falls in love with a Muslim girl, Zoya (Sonam Kapoor). He tries to forget her. Certain circumstances make him go berserk. 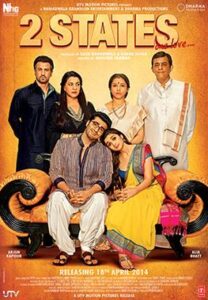 Hindi romance film directed by Abhishek Verman. It stars Arjun Kapoor and Alia Bhatt as star leads. The plot reflects the edition of Chetan Bhagat, where Krish (Arjun Kapoor) and Ananya (Alia Bhatt) fall in love despite different cultural backgrounds. Both of them try to convince their parents. They were leading to answering many questions in families. 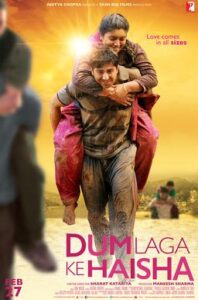 YJHD is a hindi romantic comedy film directed by Ayan Mukerji starring Ranbir Kapoor, Deepika Padukone, Kalki Koechlin, and Aditya Roy Kapoor. The story revolves around Kabir (Ranbir Kapoor) and Naina (Deepika Padukone) who fall in love but fail to express it. They get back their feelings when they meet again at Aditi’s marriage.

Hindi romantic drama film directed by Sandeep Reddy Vanga which is a remake of Arjun Reddy. It stars Shahid Kapoor and Kiara Advani as the lead cast. The plot revolves around Kabir (Shahid) and Preeti (Kiara) who fall in love during their MBBS. They part ways when Preeti’s family refuses to accept this affair. The couple gets back after months of sadness and depression.

Let’s just chill out with love in the air.

Allu Arjun, the icon star of the South Indian film industry, known for his elegant dancing skills and...
Entertainment

Kannada romantic movies have always fascinated people with their engaging storylines that have managed to keep people hooked...
Entertainment

Nothing beats a good thriller movie for getting your pulse pumping. If you're searching for some high-octane action,...
Entertainment

When you hear the word "Indian horror series and movies on Netflix, your expectations drop almost instantly. You...
Entertainment

International women's Day is an excellent time to honor and appreciate not only the women in your lives but...