The stunning Revolt series of electric AI-enabled motorcycles have just been launched by Revolt Intellicorp last month. The Revolt motorcycle is available for purchase in two cities namely Delhi and Pune. The electric vehicle is the new buzz in the town and had been closed for bookings of September and October already.
There are three variants of the motorcycle: Revolt 300, Revolt 400 and Revolt 400 premium. The most favorite among the buyers is Revolt 400 premium and it’s getting sold like crazy up until now. There are several reasons behind why you should also head to a revolt showroom now and get yourself a Revolt ride.

The company offers you to take a Revolt motorcycle home at just a mere cost of 2999/month for 37 months if you purchase revolt 300. The Revolt 400 and Revolt 400 premium would cost you 3499 and 3999 per month again for 37 months.
The greatest thing about their policy is that they are going to generate your monthly EMI via your Adhaar card only and you need not have a credit card for such instance.

The main fear of someone driving an electric-powered vehicle is that they will juice out the battery pretty soon and that they will need to replace it over time, quite frequently. But the company had addressed this problem and they have just the perfect solution.
Revolt Intellicorp is offering a lifetime warranty for the battery when you purchase Revolt 400 and Revolt 400 premium. They believe in their own technology to claim such a promise like this and this shows that you are receiving a good product after all. 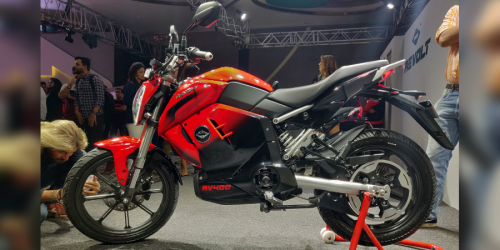 
Want to feel the engine revving and hungry for the ‘Wroom-wroom’ sound, well being an electric-powered vehicle, you just can’t expect even a little sound from Revolt motorcycles. They actually sound like nothing but to our surprise, there is a speaker at the base of motorcycle and it produces different revving sounds. The sounds can be controlled with the Revolt mobile app.

The Perfect Companion for City Rides


The ride is stylish, comfortable, cost-effective, non-polluting and much more of what you can expect from a perfect motorcycle. The battery takes about 4 hours to charge and there are battery stations setup by Revolt to exchange a juiced out battery with a charged one. Look wise, the Revolt motorcycles are just commendable and are far better looking than many of their prime competitors.
The top speed of Revolt 400 is 85 Km/hr, which is quite decent in light of the fact that its an electrically powered vehicle. The distance it can travel on a single charge is between 85 km to 150 km when regulated from sports mode to economy mode respectively.