OnePlus has been one of the best smartphone manufactures and is also one of the major competitors for brands like iPhone, Samsung, and Google. The quality that it provides quite fascinating remaining that we do also take a look at the price point for which it’s selling its devices.

Recently One Plus have launched OnePlus 8 and OnePlus 8 Pro which are both powerhouses and can take down any phone in their price point. But the price point is so high that its seemingly out of reach of the common folks who used to once cherish a device like One plus, for they’ve used to keep their price low.

But working on their problem One Plus have a new device in making and it’ll possibly be called the OnePlus Z. According to rumors, it’ll be the cheapest smartphone from OnePlus that’ll be available in the current market. 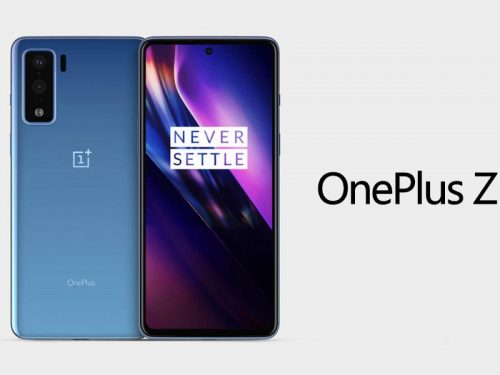 Also, there are plans to launch it first in the Indian markets for Indian markets are one of the biggest sources of business for the Chinese smartphone manufacturer. The current situation is also the right time to launch such a device for the people who are already burdened by the economic instability by the pandemic at hand.

Companies like iPhone and Google are already on a similar path with their devices iPhone SE and Google Pixel 4A. Which offer the uniqueness and brand name of these companies with a little less power and a little less cost as compared to their flagship devices.

Now, let’s take a look at what’s under the hood of the upcoming OnePlus Z smartphone and after that, you can determine that if you will to won’t be willing to invest in the device.

The display on the device would be of 6.4 inches with a punch-hole camera in the center of the device.

The design would not be something of a focus on this device due to the lowered price range and it’s expected that it would be missing some iconic design feature of the OnePlus but would still manage to pull off a decent look.

The device would be coupled with a Snapdragon 765 processor which is a downgraded processor if compared to One Plus’s current lineup but would still be able to give you a pretty decent performance output.

It could couple a decent 8 GB’s of RAM with 256 Internal memory and a fingerprint sensor as well for smooth performance and enhanced security.

The divide would come with a 4000 mAh battery with 30W fast charging and would not disappoint anyone for whom battery is an important factor of consideration before buying a smartphone.

There might be a triple camera setup which can consist of a 48-megapixel primary lens, a 16-megapixel secondary lens, and a third 12-megapixel lens. One can expect pretty decent shots with their OnePlus Z with the configuration they’re offering.

The expected launch date for the device is claimed to be in July 2020 by many sources on the internet and the expected price range would fall down in the 30,000 mark category.