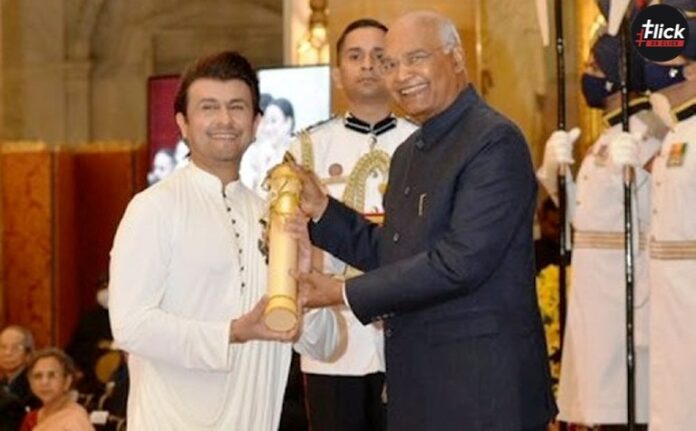 In Fact, Nigam, a renowned Hindi cinema background singer, has received numerous awards, including a National Film Award for his performance of the title tune in the 2003 romantic movie ‘Kal Ho Naa Ho.’

President Kovind presents Padma Shri to Shri Sonu Nigam for Art. A well-known singer and music director, he has sung over 6,000 songs in more than 28 languages. pic.twitter.com/mwONZAyJ9I Nigam is best known for her work in Hindi and Kannada movies, but she has also performed in Bengali, Bhojpuri, Tamil, Telugu, Marathi, Odia, Nepali, Gujarati, Malayalam, Kannada, and other Indian languages.

However, Padma Awards for this year include four Padma Vibhushans, 17 Padma Bhushans, and 107 Padma Shri Awards. Whereas, thirty-four of the honorees are women. Additionally, the list also contains 10 foreigners/NRI/PIO/OCI and 13 posthumous winners.

Significantly, the Padma Awards are given out every year on the evening of Republic Day. Padma Vibhushan (for extraordinary and distinguished achievement), Padma Bhushan (for outstanding service of higher rank), and Padma Shri are the three main categories of honors (distinguished service).

Sonu Nigam had already stated in an appearance with Bollywood Hungama last month that he will be unable to receive the award. In expectation of a Padma Shri nomination, he had also written a response. He had previously stated that he would say, ‘Don’t you think it’s too late in the day to award me the Padma Shri?’

He started by saying, “‘You guys are giving me Padma Shri now? You guys have been teasing me for a long time. We are also human beings and we also get lured by these temptations. So, is there a person who would be felicitated with an award and would not like it?”

He says “Those who don’t get it, only they say it like that. It’s a good feeling to be given acclamation and recognition at the right time. Justice given late isn’t called justice. So, I said, ‘I won’t be able to accept this award. I said ‘This is too late. You are giving Padma Shri to me now. I am past that stage of expecting and I have stopped looking in that direction already”

Sonu Continued “I am also aware of who nominated my name as well. He is a legendary classical singer. I will ask him one day if I can tell his name publicly or not someday. Everything has happened so beautifully because a musical authority nominated by name that ‘You should give it to him because it’s been far too late”

Read More: Oscars 2022: Will Smith smash Chris Rock in a rage, or is it scripted?

Singer Rahul Vaidya has got huge popularity after he got featured in the most controversial reality show Big...
News

A week after releasing the iOS 14.4 update, now Apple has rolled out iOS 14.5 beta, and iPad...
Entertainment

Are you tired of the same storyline and plot in Hindi movies? Do you want to watch something...
Technology

Have You Checked The New ‘Add To Cart’ Button in WhatsApp?

WhatsApp has been bringing in updates after updates and that too all the good ones this year. Now,...
News

In the initiative most people are joining to push the usage of electric scooters, and Ola has seemingly...
World News

Indonesian researchers have successfully developed a COVID-19 testing kit that claims to detect the presence of the virus...
Offers

It is a ‘To Be On Cloud Nine’ moment for enthusiastic gamers as Amazon Sale is announced, its...
Entertainment

The Kapil Sharma Show has slowly but surely become one of the most loved television shows in India...