Paytm Mini Appstore is the new inclusion from Paytm’s side and this time they’re looking to take over the app market sector.

It is to be noted that the demand for such an AppStore was widespread after Google announced a 30 percent charge for apps that do not use its payment mechanisms. And hitting right on the spot, Paytm made sure to deliver, the exact thing needed in the hour. 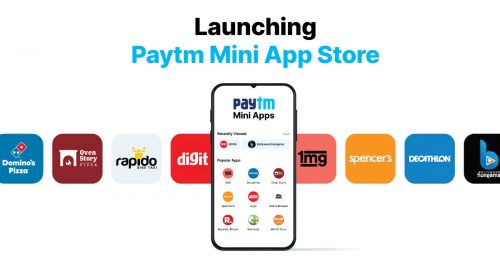 Now, this app store is actually different from what you might have been thinking. It is not a standalone store where other can host the full applications but a mini one. Yes! The AppStore is just a section inside Paytm’s main app, from where you would be able to access other apps.

The working example of that would be, if you want to open app X then you head onto the home page of Paytm, click more, and find mini AppStore. In there, all the apps that have been uploaded on the store would be listed and choose App X and use it inside the Paytm app itself.

Recently Google is getting heat from the developers for one reason and that is the unnecessary 30 percent fee inclusion on Apps. But on seeing the aggression of developers, they have decided to postpone this fee inclusion till March 31, 2022.

Now, it cannot be ignored that just about some time back Google kicked Paytm off their Appstore for violating their policy. To which the Paytm replied saying that, Google just wants to promote its payments app and restricting them from offering cashback in order to do the same, hence they’ve banned Paytm.

To which Google obviously denied and gave the reason that any app that can redirect to a third-party website or initiate user traction in a game of luck, cannot be on their platform due to guidelines.

Well! Apart from all that controversy, Paytm is in full mode to develop this app store fully and has a list of 300 top apps that would be hosted on this Mini Appstore. Some of the big names included Dominos, Netmeds, Ola, and more.