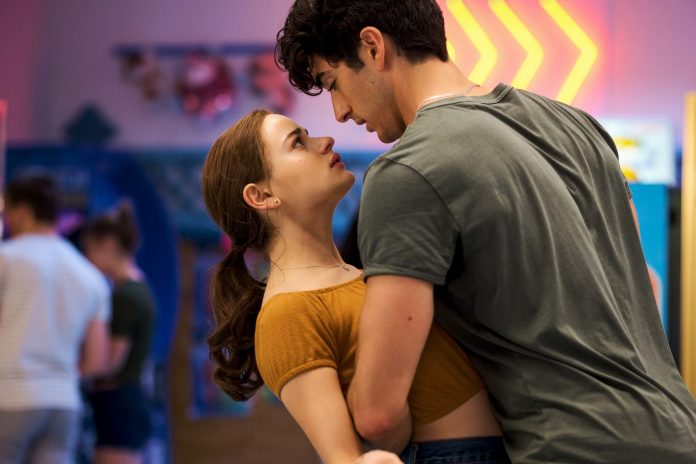 The day that everyone was waiting for has finally arrived. Netflix, yesterday, launched the trailer of the romantic-comedy sequel, The Kissing Booth 2 starring Joey King and Jacob Elordi. There were speculations about making a sequel of the hit first part and Netflix eventually affirmed the news early this year.

The movie continues where the first installment was left at a loving endnote. In the first installment, Elle Evans (King) and Noah Flynn (Elordi) spent the most memorable and lovingly summer ever. It is shown that the couple has finally lived the dream after the event of The Kissing Booth.


But now, as summer is speeding towards its end, it is time for everyone to go back to school. And while Noah is going to his favorite college Harvard, Elle is staying behind and has to complete her high school. She is now in her Senior Year and striving on every way to get into her dream college.

While the idea of a long-distance relationship began to find its depth of trust, certain new characters are introduced to the two love birds. At Harvard, Noah meets the “perfect girl” and everyone’s crush (Maisie Richardson-Sellers) and the two are closer than any ‘Friend’ couple.


Meanwhile, in the Senior year, Elle is trying to balance a long-distance relationship with the company of her best friend Lee (Joel Courtney). Adding to her life of complications is her hot-shot handsome, charismatic new classmate named Marco (Taylor Zakhar Perez).

Everything’s going perfect for the couple (and in their secretive college lives) until Elle finds herself on the biggest dilemma she has ever faced. As the year is coming to an end, Elle faces the two paths situation: going to her longtime dream college in Berkeley with her bestie or head to Boston to be close to Noah.

The Kissing Booth 2 is the fight of heart vs mind and the fact that how much Elle trusts Noah and where her heart truly belongs. The movie is a part of Netflix to give the viewers a good old Summertime streaming experience while living indoors.


The trailer reads “Rules can be broken but so can hearts”. Netflix announced the work in pre-production for the sequel back on Valentine’s Day of 2019. Joey King, however, did affirm the news this year in May during a ‘Kissing Booth Secrets Live’ online event.

The two actors commented on how the next movie should be. Seeing the comedic note of the event, fans concluded the very fact that the sequel might bring new surprises and shenanigans into the mix. The movie is directed by famous romantic comedy director Vince Marcello.

The Kissing Booth and The Kissing Booth 2 are based on the novel which goes by the same name and written by Beth Reekles. The movie is set to launch on July 24 at Netflix as a part of the self-owned Netflix Originals production.

Stay tuned to get more upcoming movies and series on Netflix.

The women-centered crime thriller show will appear soon on a streaming site. "She" is a Netflix-funded Bollywood crime...
Entertainment

Jamtara Season 2 just dropped on Netflix, and the crime thriller web series is getting a lot of...