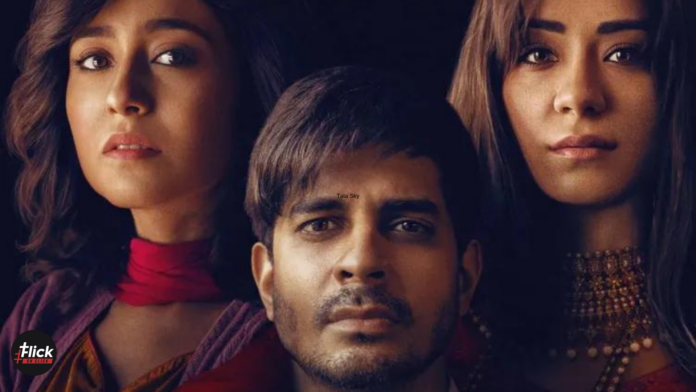 “For she had eyes and chose me.” –Willaim Shakespeare, Othello.

Did you watch the new Netflix series starring Shweta Tripathi, Tahir Raj Bhasin, and Anchal Singh? Or are you planning to watch this Netflix web series in a few days? This thrilling series, with its gripping plot, which makes it engaging, is a must-watch for all series lovers.

A star-crossed Vikrant, the film’s protagonist, is an engineer with plans to marry his childhood love, Shikha. He gets trapped in UP Politics after crossing paths with Purva, a femme fatale, who obsesses over Vikrant.

She is the daughter of the local Vidhayak Akheraj. Trapped between love and lust, Vikrant finds it challenging to give in to Purav’s obsession and has to when Shikha gets involved. What follows is a story of obsession amalgamated with lots of twists and belligerent scenes.

Based on William Shakespeare’s Othello, Yeh Kaali Kaali Ankhen is set in the fictitious town of Onkara (Yes, it sounds like The Vishal Bhardwaj movie name, which too was based on the same play). The film draws its name from a song of the hit 90’s film, Baazigar, which starred Shah Rukh Khan and Kajol in pivotal roles.

Shweta Tripathi plays the role of Shikha. Don’t compare her acting skills with that in Massan or Mirzapur, where she played the part of the bold Golu Gupta. Tahir Raj Bhasin, who recently got appreciated for his performance in 83, plays the role of Vikrant and does complete justice to the character of Vikrant.

Anchal Singh, playing the part of the obsessed Purva, is enchanting and convincing in her role. Her performance will remind you of Vidya Balan in Ishqiya or Aishwarya Rai in Khakee. She indeed blends fierceness and seductiveness with perfection.

Senior actors like Brijendra Kala and Saurabh Shukla are bang on.

A pulp fiction, Yeh Kaali Kaali Ankhein, is loaded with compelling moments mixed with violence, sex, comedy, jealousy, and heartbreak. This series will let you through a roller coaster of emotions.

With some unanswered questions and a few loopholes, the series will engage you straight throughout the eight episodes, and you won’t even realize how fast time flies by. You’ll witness the climax in the last two scenes. With no dull locations, Yeh Kaali Kaali Ankhein is an entertaining piece of work that you must watch.

Previous article
Celebrity Special: A Sneak Peak Into The Journey of Tahir Raj Bhasin
Next article
Shark Tank India: Get To Know Who Are The Sharks
Flickonclick

James Cameron is a filmmaker who is known for pushing the boundaries of cinema. He is the director,...
Offers

India’s expert drug panel approved the vaccine developed by Oxford- AstraZeneca 'Covishield' against the deadly virus which has...
Finance

On Saturday, January 23, Finance Minister Nirmala Sitharaman made a big announcement regarding the launching of the Union...