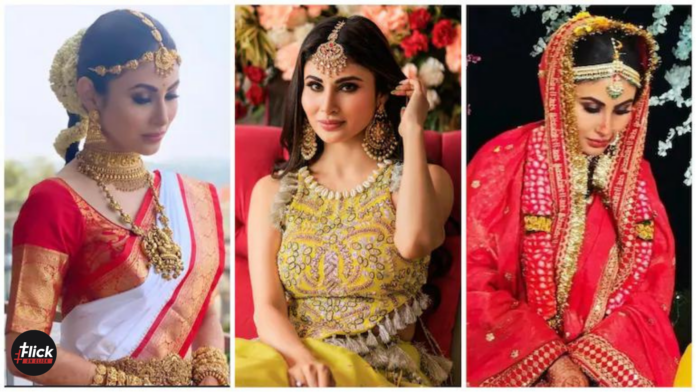 Yesterday, on 27th January, Mouni Roy tied the knot to her longtime boyfriend, Suraj Nambiar. The couple married at a destination wedding in Goa. Initially, they married as per Malayali norms, and later, in the evening, the couple married following Bengali rituals and traditions.


Mouni Roy took to Instagram to share her wedding pictures and video. And that video shows the bride walking to the mandap with her family and bridesmaid, wearing a red and white traditional sari. Also, her close friend, Mandira Bedi, gestures towards Roy to keep the evil off her.

Roy wore a traditional Sabyasachi lehenga at the Bengali wedding, and her partner wore a beige-colored Sherwani.

The pre-wedding festivities had begun one day earlier. She and her close friends shared the pictures on their social media handles. Actors like Aashka Goradia, Arjun Bijlani, Rahul Shetty were present.

As per various sources, the couple had met in Dubai in 2019. They started dating soon though Mouni denied her relationship with her partner several times. Both of them were often seen partying together. A picture had gone viral in 2020 where the duo was seen together in Thailand.


The Naagin-actress married investment banker Suraj Nambiar originally from Bangalore. He is also Director Head of the Capital Markets in UAE.

After completing engineering, he went to Stanford University to study Investment Science and International Management.


Also Read: Breakups of Bollywood couples that felt like crying

Mouni Roy’s fans and friends from the industry have congratulated her.

Mandira Bedi wrote, “Ecstatic to be with and thrilled for my fav people, Mr. and Mrs. Nambiar!! Beautiful ceremony! I love you @imouniroy @nambiar13.”

Alia Bhatt also wished the newlywed a sweet wish. She wrote, “Congratulations, Mouni! You look so beautiful and happy! Wishing you both all the love in the world!”
We congratulate the power couple and wish them lots of love and good wishes for the future!

Previous article
Shark Tank India: Ideas That Received Heavy Funding and More About The Show
Next article
Six Upcoming Movie Releases of 2022 Which You Should Definitely Watch
Flickonclick

December has just begun and the season of parties and weddings has started with a bang. Almost every...
Lifestyle

A Mehndi pattern is one of those things that can make you stand out at a wedding or...
Lifestyle

Planning for a dreamy destination wedding with your partner? You must think about all the fun, joy and...
Entertainment

Today's rumor in the Bollywood nation is that the "Zindagi Na Milegi Dobara" starring actress Katrina Kaif and...
Lifestyle

Kiara Advani & Sidharth Malhotra Wedding: All You Need to Know

The love birds of B-Town, Kiara Advani and Sidharth Malhotra, have almost confirmed on the couch of Koffee...