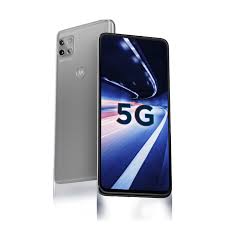 It was announced on 8th January 2021, and also the price and specifications have been announced in the United States this week. The expected release date of its launch is 14 January 2021. The design language and the specifications of this handset look quite similar to the Moto G 5G that was launched in India back in November 2020.

This smartphone is designed with a sleek body design to perfectly fit into your pocket with the dimensions – 166.1 x 76.1 x 9.9 mm (6.54 x 3.00 x 0.39 in). The phone comes with a 6.7-inch, 108.4 sq. cm touchscreen display (85.7% screen-to-body ratio), and a resolution of 1080 X 2400 pixels of 20:9 aspect ratio and at a pixel density of 393 pixels per inch (PPI). Manufactured with a Nano-SIM technology with a water-repellent coating which is going to protect the SIM even if you take your phone underwater. The weight of this device is quite heavy which is 212 grams, as compared with other smartphones. It consists of an in-built octa-core processor that runs on the Android 10 operating system, and integrated with Qualcomm SM 7225 Snapdragon 750 5G (8nm) chipset for high performance and a better gaming experience.

There will be two models in this 5G smartphone – 4GB RAM 64GB ROM and 6GB RAM 128GB ROM, and is available in two variants, that is, Volcanic Gray and Frosted Silver. As far as the cameras are concerned, the Motorola One 5G Ace on the rear side packs a 48MP camera with an f/1.7 aperture which is 26mm wide, 8MP with an f/2.2 aperture which is a 118-degree ultrawide camera, and a 2MP with an f/2.4 aperture which is a macro camera. It also has extra features which are supporting the rear camera like LED flash, HDR, and Panorama. The rear camera supports 4K video recording at 30FPS and 1080p at 30/60FPS. The front camera comes with a 16MP wide lens with an f/2.2 aperture and supports 1080p video recording at 30FPS.

Wired earphones or headphones can be injected as it has a 3.5mm jack port. The NFC (Near Field Communication) feature is also added to make secure transactions, exchange digital content, etc. Connectivity options for this device include Wi-Fi, Bluetooth 5.1, USB Type-C 2.0, and its sensor features are Fingerprint (rear-mounted), accelerometer, gyro, proximity, compass, and barometer. It has a non-removable Lithium-Polymer battery of 5000mAh. Its price has been finalized up to $399.99, that is, Rs. 29,250/- in India.


Previous articleWhatsApp or Signal : Which Messaging App You Should Choose?
Next articleWhy WhatsApp Is Still the Better Than Telegram and Signal?
Flickonclick

The Android environment has gone a long way since its early days when device manufacturers infrequently updated their...
News

Apple has been creating hype about their 'Apple Unleashed' event, scheduled for today at 10:30 PM. If you're...
Offers

Amazon is hosting an Amazon Fab Phones Fest sale and will begin on 22 December 2020, the day...
News

Nobody could have imagined that Samsung will introduce RAM Plus feature in one of its mid-range smartphones. This...
News

Google has finally unveiled the new Google Pixel smartwatch series for its users worldwide. After many speculations been...