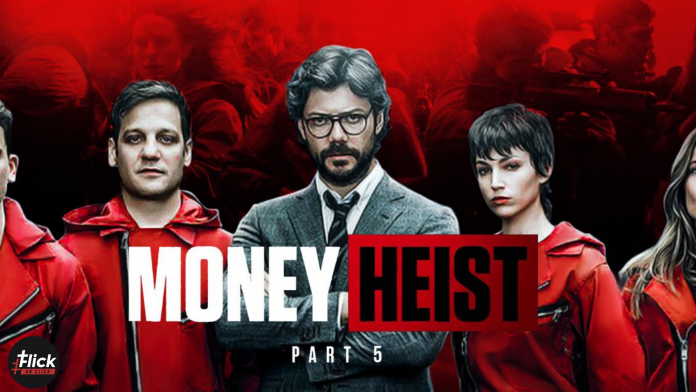 Here’s some exciting news for all the Money Heist fans who have been patiently waiting. Season 5 is here, and it’s back with a whole lot of twists and turns.

The trailer of Money Heist Season 5 was released on August 2, 2021. The trailer only shows us to expect the unexpected.

For people who may not have heard about the show, this would be the perfect time to hop onto the bandwagon. During this free time Covid has brought to us, this show makes a great binge watch. Money Heist will keep all of us on the edge of our seats.

What Is Money Heist About?

This one is quite a story to tell, which keeps you invested every single minute of it. It is a Spanish based thriller series based on a group of robbers and one mastermind behind it all. People from different backgrounds come together to plan a heist in a bank, and the brain of it all is a ‘Professor’.

The entire show makes your heart race and takes you through an emotional roller coaster. In this show, we will mainly see two scenarios— one inside the bank and one of the investigation camps set right outside.

By the end of the show, there is no doubt of you getting attached to each character and understanding their core personality.

Money Heist Season 5 will be divided into two volumes:

Volume 2, the final batch consisting of 5 episodes, will be released on December 3, 2021.

What To Expect In Season 5

Season 5 picks up from where it last left off. People who have watched the show know that the end of season 4 left us with new stories and suspense to keep us thinking.

From the trailer, we see that the Professor, this time, is himself in a difficult situation that he has to tackle while still keeping up with the heist. In season 5, all the obstacles further get tense and more problems need to be dealt with by our characters in this season.

Last time we were left with the death of one of our favorite characters, Nairobi and Berlin. In this season, we see them overcome the loss of Nairobi and some stories experienced by Berlin.

The most exciting thing to see in this season is the involvement of two ordinary people who turned robbers. We see the alliance between the head investigator and one of the trapped common girls with the robbers themselves. Further, the plot thickens for each character and their story.

Money Heist is the type of show that never stops surprising you. Watch this show to be taken through a journey of thrilling situations and a master-planned heist.

It is the type of show where one minute you might hate on a character and another you will feel attached to their presence in the front. This show has some beautiful songs such as ‘Mi Amore’ to offer as well.

The women-centered crime thriller show will appear soon on a streaming site. "She" is a Netflix-funded Bollywood crime...
Entertainment

If you've been sitting tight on your recommended list and still haven't figured out what to watch this...
News

Watching good movies and web series in one's own regional language is just satisfying on many different levels....
News

Ajeeb Daastaans Movie Review- Netflix has long entered into the Indian Cinematic zone and has proved it's mantle...
Entertainment

China is the house of the largest film & drama production studio in the world. We have included...