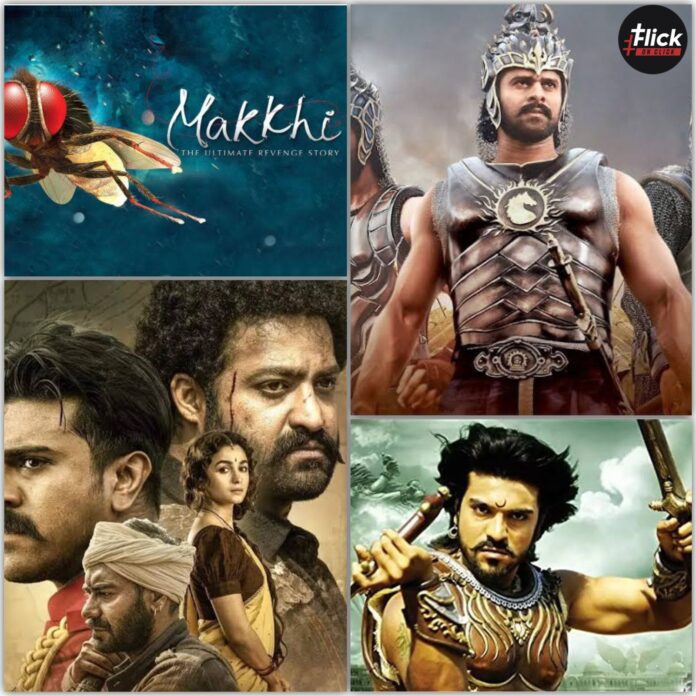 There’s a lot of buzz surrounding SS Rajamouli’s RRR film. RRR has been able to capture everyone’s interest, from its star ensemble, which features NT Rama Rao Jr, Ram Charan, Ajay Devgn, and Alia Bhatt, to its gorgeous storyline. The film has ticked all the boxes, whether it’s the track Nattu Nattu or Alia’s performance as Sita.

According to the media, the fictional tale, two of India’s best and most underappreciated independence fighters, is told in the RRR film. Can Rama Raju and Bheema build a solid front and conduct a ruthless struggle against the British? Will they be able to complete the operation?

The plot centers around an ancient brave hero who is drawn into a decades-old conflict between two warring individuals. Prabhas in the role of Baahubali surely won many hearts, but there was a one-million-dollar issue that remained unaddressed.  Baahubali 2: The Conclusion has been in the works for about two years. And it was well worth the money.

Makkhi is a Hindi remake of the Telugu hit Eega. It is the tale of Jani and Bindu, who are in adoration but have never acknowledged their feelings to one other and continue to enjoy their unspoken love. Sudeep, a millionaire, and powerful businessman falls in love with Bindu and wants to own her for his pleasure, but he discovers that she is in love with Jani, which irritates him. He murders Jani, following which the hero reincarnates as a housefly to exact revenge on his murderers.

The tale of Magadheera takes place in the year 1609, against the backdrop of divine secrets of death and reincarnation. Kala Bhairava (Ram Charan Teja) is the protector/chief guard of the royal house of Udayghad. Mitra (Kajal Agarwal), the heir princess, is head over heels in love with him. However, the king’s nasty relative wishes to marry her. Sher Khan (Srihari) intends to attack Udayghad. They all died as a result of the procedure that followed. After 400 years, these four persons reincarnate into the modern world. Harsha (Ram Charan Teja) is a motorcycle racer. He falls deeply in love with Indu (Kajal Agarwal). And a terrible person named Raghuveer is on her tail.

Chatrapathi is a Telugu-language action thriller film produced by S. S. Rajamouli and sponsored by B. V. S. N. Prasad that was released in 2005. Prabhas and Shriya Saran lead in the film, with Shafi, Bhanupriya, and Pradeep Rawat playing supporting parts. Aarthi Agarwal appears as a special guest. The film was released on September 29, 2005. The film earned an estimated 22 crore in producers’ fees against such an 8 crore budget. Hence, the film received two Nandi Awards.

Vikramarkudu is a 2006 Telugu action movie by S. S. Rajamouli and featuring Ravi Teja, Anushka Shetty, and Vineet Kumar. Athili Sathi Babu (Ravi Teja) is a novice burglar in Hyderabad who enjoys executing daring deeds. He finds love with Neeraja (Anushka Shetty), whom he meets at a wedding. Sathi Babu wins her heart and she begins to fall in love with him.