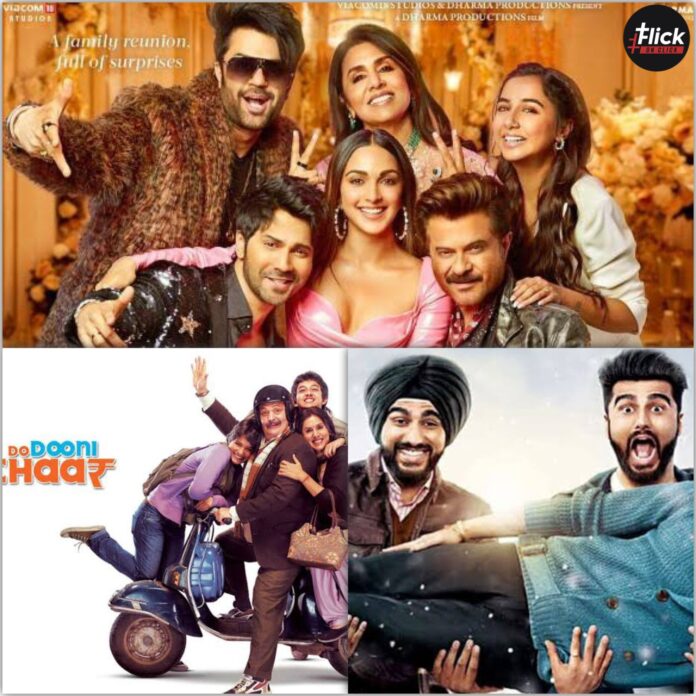 The buzz for Raj Mehta’s next flick, JugJugg Jeeyo is tremendous. The film recounts the experience of Kukoo Saini (Varun Dhawan) and Nainaa Sharma (Kiara Advani) as a husband and wife seeking a divorce. The scenario becomes exacerbated when the latter discovers that his father, Bheem (Anil Kapoor), also wishes to divorce his mom, Geeta (Neetu Singh). While the show’s concept promises a lot of fun, the ending may leave you craving more. Flickonclick believes there should be no restrictions on fun and entertainment. So we have compiled a list of 7 similar movies like Jug Jugg Jeeyo.

What made Amit Sharma’s Badhaai Ho so delightful was its comedic texture in delivering a film with a joyful finish. The inspirational sequel to the 2018 movie, Badhaai Do, may not be as engaging as the Neena Gupta-starrer. However, the topic they have chosen to treat is more difficult, and the error margin in crafting a comedic film out of it is exceedingly small. In that regard, we believe Harshwardhan Kulkarni’s Badhaai Do is the less compromised and most delightful tale of two LGBTQ people.

In this comedy, Arjun Kapoor portrays exact twin brothers Karan and Charan, who go through a humorously confusing series of events. Karan is reared by his aunt in London when his parents pass away, whereas the latter is nurtured by his uncle in Punjab. They both are siblings and cousins, according to that logic. However, their circumstances get much more tangled as grownups when Charan’s wedding is planned with a close friend’s daughter although he is in love. He seeks assistance from his brother, and the two delve deeper into the pandemonium in the hopes of resolving this issue. Mubarakan is one of the best comedies like Jug Jugg Jeeyo that is worth watching.

Do Dooni Chaar is set in New Delhi and focuses on the modest Duggal family, who live in a one-bedroom house in Lajpat Nagar and struggle financially. Santosh (Rishi Kapoor), the father, is a math teacher who attempts to establish a financially secure existence for his spouse, Kusum (Neetu Singh). The Duggals are sarcastically urged to buy a car after borrowing a neighbor’s automobile for a wedding and accidentally ruining it. Santosh regards this incident as a personal attack and vows to get a car as soon as possible. However, his financial difficulties and two rebellious adolescent children make it a difficult chore.

The comedic riot blends family drama and the mafia. Dr. Ghungroo (Paresh Rawal), desperate to marry off his nephew Rajiv (Akshay Kumar), mistakenly arranges his marriage to don Uday Shetty’s (Nana Patekar) sister, Sanjana (Katrina Kaif). Decrying his mistake, he tries to talk Rajiv out of having the wedding, but things don’t go as planned. Rajiv and Sanjana fall in love as Uday delegates his trusted assistant Majnu (Anil Kapoor) to ensure the wedding goes off without a hitch.

The third film of Rohit Shetty’s Golmaal sequence takes a slightly different path than the previous two, focusing on a clash between two pairs of siblings. When bus conductor Pritam (Mithun Chakraborty) runs into Geeta (Ratna Pathak Shah), a long-lost love comes to a satisfying conclusion. The old lovers marry, much to the chagrin of their kids, who already have a nasty feud. Madhav (Arshad Warsi), Laxman (Kunal Khemu), and Lucky (Tusshar Kapoor), Pritam’s kids, frequently clash with their new siblings Gopal (Ajay Devgn) & Laxman (Shreyas Talpade), with their companion Daboo (Kareena Kapoor Khan) pleading for peace. When a bumbling gangster and a piece of stolen jewelry are brought into the equation, the plot devolves into rib-tickling chaos.

Anjali (Kareena Kapoor) and Jai (Akshaye Khanna), who study at the same college, come from fighting families. Anjali professes to like Jai as part of her grandmother’s payback scheme. Meanwhile, Jai’s dad, Angar Chand (Amrish Puri), has barred his 4 children from ever marrying because of an occurrence with Anjali’s family, but Jai sees an opportunity to retaliate against Anjali and follows with the stream. Things turn for the worst when this phony romance becomes very genuine, pushing the duo to confront and finally end the age-old feud.

This comedy-drama stars Ayushmann Khurrana as Nakul Kaushik, a 26-year-old who learns that his mom (Neena Gupta) is conceiving at the age of 52. The conservative middle-class family panics, with Nakul, his brother Gullar, and their grandma criticizing the couple for being so in love at such an advanced age. However, when the laughing, ridiculing, and hysteria of society subsides, Nakul places himself in his folks’ shoes and resolves to stand by them as they wait for the arrival of their third baby.

Previous articleWhy You Should Watch the Masoom web series on Hotstar?
Next articleAmazon Prime Video vs Disney+ Hotstar: The Battle of OTT Streaming Platforms
Udit Arora

It is a universal truth that every time you see a sequel movie, you are stuck with a...
Entertainment

Bollywood works well with a wide array of genres but still takes a step back and hesitates when...