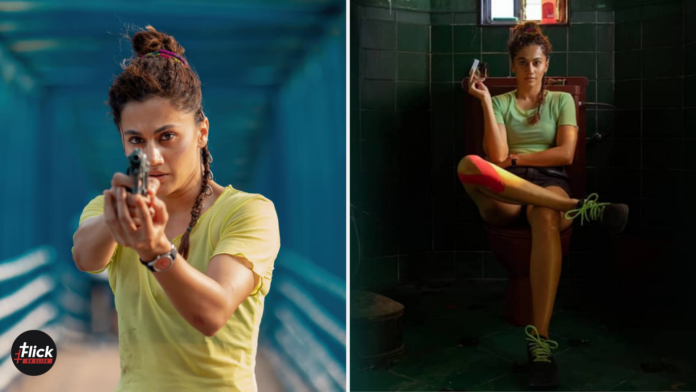 The movie takes you through a significant journey. After losing a mobster’s cash, Savi (Taapsee Pannu) tries to save her partner Satya (Tajir Raj Bhasin). Subsequently, Savi races against the clock to save the day and free her boyfriend.

Savi is a very interesting character in the film. She attempts to save her gambler boyfriend. Taapsee Pannu has always proved herself through her films, for instance, Thappad, Pink, to name a few. The talented actress has delivered a spectacular performance and has entirely done justice to the original film.

Tahir Raj Bhasin as Satya will convince you that no one else could have delivered a better performance. Lately, the actor has received much appreciation for his acting skills in Yeh Kaali Kaali Aankhein. furthermore he has done a commendable job here too.

This film story is based on Run Lola Run film. But if you haven’t seen this movie yet, there’s something more in this film. The writers delivered a masterstroke by drawing parallels with the mythological tale of Savitri & Satyavan. Hence Savitri becomes Savi and Satyavan becomes Satya here.

The cinematography adds to the visual richness of the film. Also the moody lighting and the entire stylization of the film are worthy of praise along with frequent split screens, work for the movie. Additionally, Savi is portrayed in shades of green, whereas Stya glimmered in shades of orange.

The background music amalgamates rock, pop, and EDM. Additionally, The songs come in the right places and do not disturb the narration.

You should definitely watch loop Lapeta. Because it takes one hour to come into the main story of the loop, the narration will always keep you on the edge of your seat. Netizens took to Twitter to share their reviews of Loop Lapeta.

The only things I like in #LoopLapeta was the cinematography & editing. Writing could have been more tight. @NetflixIndia

Films70: I kept on watching #LoopLapeta just because the way it was shot & edited was very different.
What a fun ride movie.
Editing style reminded me of @edgarwright , which was mostly closeups and flashy cuts.
Enjoyed a lot.@NetflixIndia #AkashBhatia @taapsee @TahirRajBhasin

Kuttey Review: Aasmaan Bhardwaj has managed to construct an enthralling tale of greed, twists, cussing and a bit...