Krishna Vrinda Vihari is going to release in the theatres on 23rd September 2022. However, the fans are already gushing about the digital release of this Telugu film. Krishna Vrinda Vihari OTT Platform, Release Date, Where to Watch, TV Rights and more are covered here. 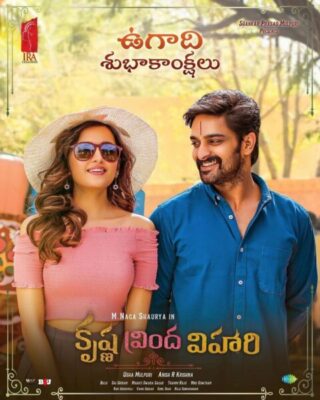 
The rom-com is directed by Anish Krishna. Usha Mulpuri and Naga Shaurya have co-produced, forming part of the crew. It will have a running time of 130 minutes at the theatres. Krishna Vrinda Vihari OTT Platform, Release Date, Where to Watch, TV Rights and more are covered here to keep you informed and updated.

The right to stream the film digitally has already been bought by an OTT service. The OTT users would be delighted to know that Krishna Vrinda Vihari will release on one of the most popular OTT platforms Amazon Prime Video in India.

Usually, it takes about 2 months for a Telugu movie to make its OTT debut after the theatrical release. One can expect Krishna Vrinda Vihari to release on the OTT platform Amazon Prime Video in the month of November as it releases in theatres on 23rd September 2022.


The music for Krishna Vrinda Vihari is composed by Mahati Swara Sagar, who is collaborating for the fourth time with Naga Shuarya on a project. It was originally scheduled to release in the theatres on 24th June 2022, but due to some unforeseen events, the movie was delayed. One can expect this Telugu film to have a heartwarming and sweet plot.

Asur Season 2 is going to be released on Voot in June 2023. The second season of the...
Entertainment

What May 2022 hold in the future for movies and series? You must be excited to know what...
Entertainment

Pathan OTT rights have been sold to the OTT platform Amazon Prime Video for a whopping amount of...