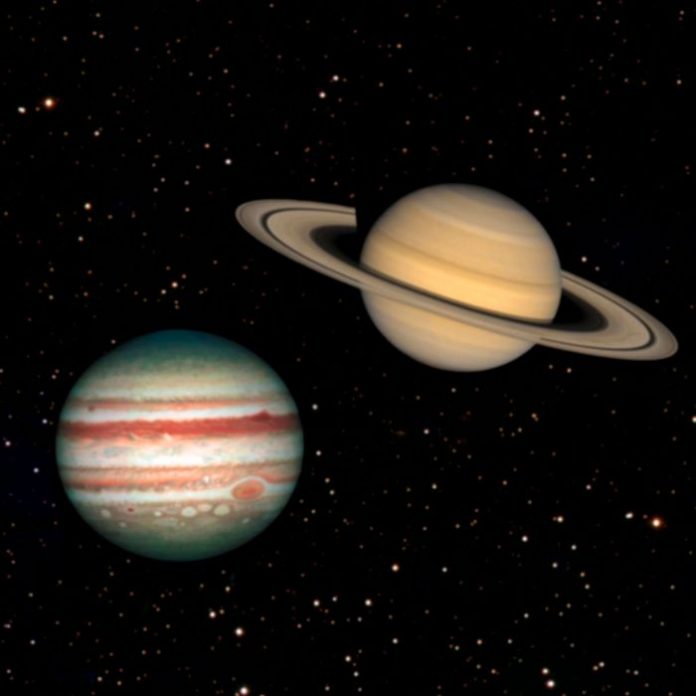 History is going to repeat itself after 397 years, as we are going to experience the greatest celestial marvel again. The planets Jupiter and Saturn will be seen closest to each other on Monday (21 December 2020). The great conjunction will happen on Monday evening between 6:30 – 7:30 PM.

The most exciting thing to watch at the time of conjunction is the four moons that will be orbiting around Jupiter, and in order to get a clear view, you will be needing binoculars or a place where you can place your small telescope. This beautiful event took place approximately 400 years ago, in 1623, and it is being said that the next one is likely to take place in 2080 (50 years to go).

Henry Throop, an Astronomer in the Planetary Science Division at National Aeronautics and Space Administration (NASA), Headquarters in Washington, said “The position of both the planets and the Earth in their paths around the sun, determines the date of conjunction, while the date of the solstice is determined by the tilt of Earth’s axis. The solstice is the day of longest night hours, giving an opportunity to people to go outside and observe the solar system.”


As the planets are going to be distant apart, but they will appear as one big star, like the star of Bethlehem, which appeared in the easter sky when Jesus Christ was born. According to NASA, Saturn will be slightly fainter as it will appear towards the left of the largest planet of our solar system, that is, Jupiter. The positions will get reversed by 22 December 2020.

Meanwhile, necessary arrangements have been made and the set-up is complete in Jawaharlal Nehru Planetarium so that the audience can enjoy the celestial conjunction. A planetarium official said in a statement, “We have to set-up telescopes in our premises to watch this amazing and beautiful conjunction of Jupiter and Saturn through a live stream on YouTube and Facebook channel (https://www.taralaya.org/) on Monday evening if the weather permits.”


Nehru Planetarium in Delhi (https://nehruplanetarium.org/) has also opened registration for the viewing of the conjunction under COVID-19 guidelines. The website mentioned on the home page that it has started the sky-watch from 20 December 2020 to avoid extra crowding, and will continue till 22 December 2020.

ALSO READ: Zodiac : How To Spot a True Capricorn, Know The Signs