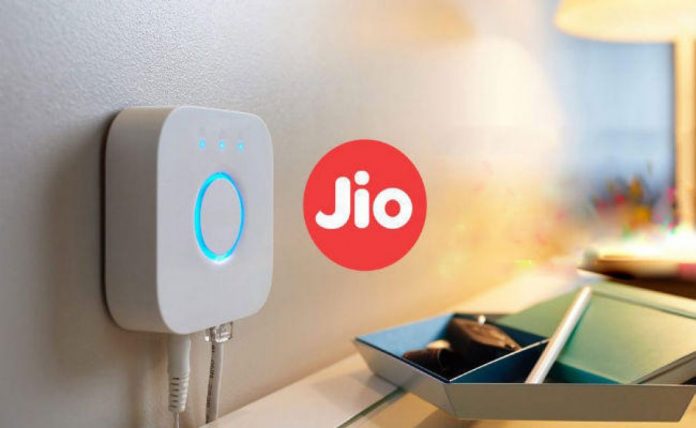 JioFiber has come up with something new to gain more and more customers. They have introduced a 30 Day free trial period and other offers like including Netflix, Amazon Prime, and 10 other OTT channels under the cost of a single data pack.


They have also reduced the prices of their basic data plan to 399 INR which is way too low as compare to any other ISP.

Now, in order to gain users, JioFiber gives you a no question asked free trial period for a full 30 days.

But in order to avail of the offer, you need to submit a small security deposit. The deposit would be calculated on the basis of your selected pack. If you go for a pack that doesn’t include the OTT services then the deposit would be 1500 INR and otherwise, it’ll be 2500 INR.

After your 30 days trial period exhausts and you’re not satisfied with the network then you can ask for a disconnection along with the refund. And as the policy says, Jio executives would do the necessities without asking even one question.

Also, the data packs are truly unlimited but have a cap of 3033 GB on data usage. There are free calling options and OTT services included as told earlier, but it differed a little according to the pack benefits that you opt to avail. 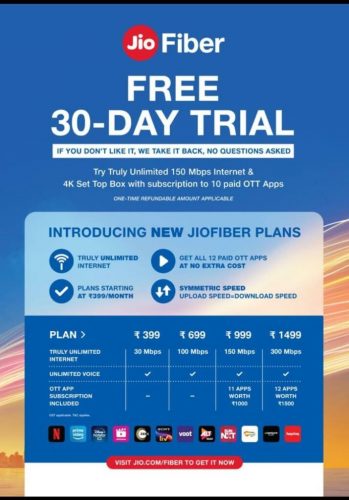 The data packs start from INR 399 and go up to a maximum of INR 1499. And in the low budget packs such as the 399 and 699 INR ones, you won’t get a subscribed OTT channel option for free as seen in the other packs further down the line.

The trial offer is available for new users only and for anyone who joined in between 15th to 31st August, they’d be gifted a jio gift voucher with the same benefits via the MyJio app.


Also, the old uses who have recharged with pre-existing older packs would continue to get the benefits. But if they wish then they can switch to the new packs with added benefits and their old data or offers would carry along with the new plans as well.

Reliance Jio is a customer-centric telecom operator and its a known fact. They have proved it from the...
Offers

JioFiber is all set to bring you a wide range of affordable broadband plans starting with just 399...
Entertainment

How to watch 83 Movie for free with Netflix and Hotstar subscription?

The film 83, starring Ranveer Singh, was premiered in theatres in December 2021. However, due to the widespread...
News

How to Get JioPhone Next Now from nearby stores

JioPhone Next, a collaboration between Jio and Google, will be released on Diwali. The smartphone will feature a...
Offers

The turf war between Jio and Airtel is not hidden, and it's getting more intense as time passes....
Offers

Jio introduced cheapest prepaid plan in India ever at Rs 1 with 30 days validity. This plan is...
Offers

The wind seems to be blowing sweet and mellow for all the small-scale and medium enterprises and start-ups....
Offers

Vi has finally come with the expected and launched its market capturing masterpiece of the pack. Yes! They...