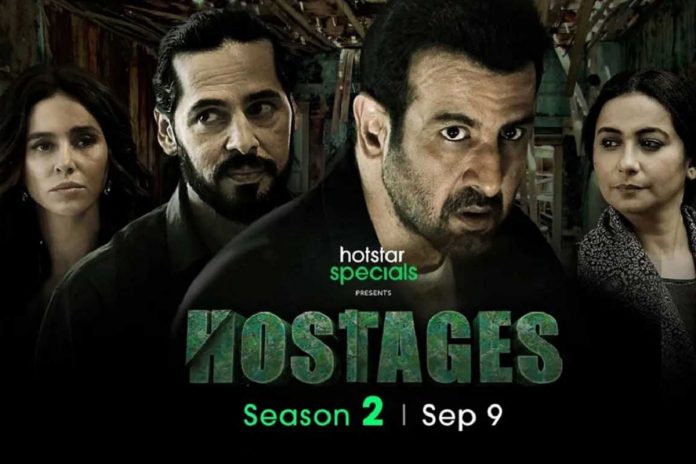 Hostages Season 1 reached great success levels as it was taken in a good way by the audience of the hindi web series. The cast of the show is full of well-known start and is making a comeback with Season 2 which has been released on 9th September 2019 and is already making a name for itself.

Talking about the storyline, it continues from where we’ve been left within Season 1 of this Hotstar Special. And in Hostages Season 2 the tagline says that ‘Khel Ab Palat Chuka Hai’ which literally means that the protagonist who was in control up until now will be the one in the target’s view.

Which is what exactly you’re going to see as  Prithvi Singh played by the uber Famous Ronit Roy, being helpless and in a tight situation this time.

And if you’ve not watched the first season than its recommended that you should go on and do that for we’re about to spoil the season one in the very next line.

So, the last arc that we’ve been introduced to in the Hostage 1 unfolds in a very dramatic manner. Prithvi Singh who’s an IPS is seen abducting the innocent family of  Dr. Mira Anand.

The reason being that she is about to operate on the CM Khushwant Lal Handa and he leverages on her so that he can brainwash her into assassinating the CM during the procedure.

Now, Prithivi might sound like a crazy person to you and he is kind of crazy to some extent also but he did it all to save his wife who’s hanging by a thread.

It’s revealed in the show that CM Handa is the biological father of his wife and she is in need of a bone marrow transplant which is hard to be matched but possibly present in blood relatives such as parents and siblings.

This is the reason for an IPS officer to go the extent of kidnapping a whole family and doing this crazy stunt.

And on top of that, the kidnapped family comes up with their own internal problems that they’ve never addressed. But are doing now because they’re left with nothing to do and have a fear of death which is why they’re clearing up any pent up thoughts they have.

The husband of Dr. Mira who is also a doctor has lost his license, her young boy is a hacker and distributes exam questions to make a quick buck and her teen daughter is pregnant. A classic case of a family that never have a dinner time conversation, right? Or whatever they were trying to portray with that.

Coming back to the current season, the allegedly dead CM has been revived somehow. Polic is involved in the case and is after Prithvi. The wife is still on a clock and time is running out for her while there is a new introduction of some extremely well dressed and rich assassins who are in planning of their own.

Go and watch the second season of Hostages and if you’ve not watched the first one and read till here then also go and watch the same, for you’ve killed all the suspense and plot points that make the series interesting and worth watching. And just to remind you, it’s not our fault, we gave a spoiler alert.

Netflix's Blockbuster Review: A hit-and-miss sitcom that suffers from lazy writing and pale performances from the main cast....
Offers

Abhay Season 3 Review- If you are an OTT series lover, then Abhay season 3 has surely been...
Entertainment

Bored from Netflix and chilling and want to have some desi fun but not the kind you get...