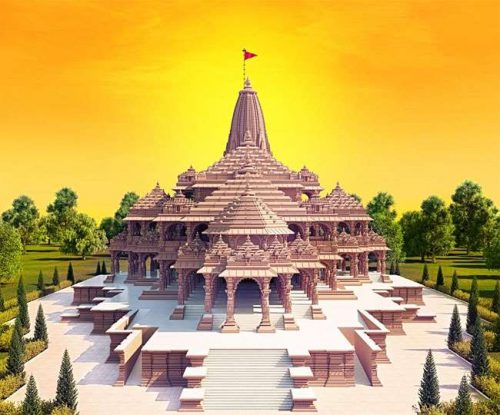 The supporters of Ram Mandir throughout the country became a prime witness of the foundation of the temple being laid down at Ayodhya yesterday. Leaders from all over the country, including Prime Minister Narendra Modi, took part in the holy ceremony.


With the Babri Masjid-Ram Janamabhoomi dispute finally coming to an end this year. All the dispute came to a resolution and saw a spiritual end to it. The ceremony, which took place in Ayodhya, saw numerous political and non-political presentees. 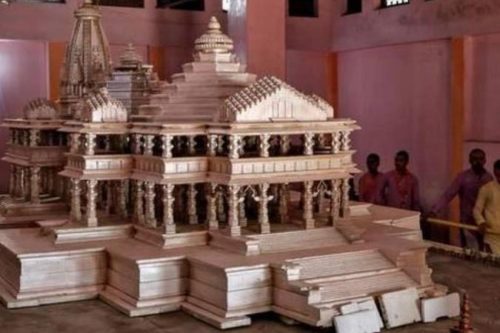 Highlights From The Ayodhya Ram Mandir Bhumi Pujan Ceremony are as follows:

PM Modi, firstly, visited the 10th century Hanuman Garhi Temple on arrival in Ayodhya. As per the tradition, he entered the premises of the temple, which were sanitized earlier today. He, then, proceeded to Ram Janmabhoomi site to lay the foundation.

Importantly, soil from more than 2000 pilgrimage sites and water from more than 100 rivers was brought for the rituals. Also, Nine bricks are kept here, these were sent by devotees of Lord Ram from around the world in 1989.


PM Modi will also unveil a plaque and release commemorative postage stamps to mark the occasion of the inauguration of the Ram temple.

The event, exclusively, was aimed to be aired upon Times Square in New York. But was later canceled due to the arising formation of norms of advocacy groups. As the temple construction over a mosque dealt a severe blow to India’s international secular standing.

“I believe that this grand Ram temple to be built in Ayodhya, like the name of Shri Ram, will reflect the rich heritage of Indian culture. I believe it will inspire the entire humanity till eternity,” PM Modi said on the auspicious occasion.

“Ram Mandir will become the modern symbol of our traditions. It’ll become a symbol of our devotion, our national sentiment and will also symbolize the power of collective resolution of crores of people. It will keep inspiring the future generations,” said the PM.

Modi also chanted the line “Jai Siya Ram, Jai Siya Ram” more often at the beginning and during his speech. The line, which resonated throughout the city, “is heard by millions of Indians, in the country and around the world,” as stated by the PM.

“It is my good fortune that I was invited to witness this historical moment. From Kanyakumari to Kshirbhavani, from Koteshwar to Kamakhya, from Jagannath to Kedarnath, Somnath to Kashi Vishwanath. Today entire country is immersed in Lord Ram,” PM Modi concluded.

The Ram Temple’s first foundation coincided with the One Year Anniversary of the removal of disputed Kashmir’s special status. The ruling was a long-standing demand of Hindu nationalists to punish defiant Kashmiris in the J&K region.


PM Modi has been a lifelong member of the RSS. His party does follow the preachings and ideology shared in the Hindutva Organization that became major support for the formation of the Ram Mandir and for the Bharatiya Janata Party.

Madhukar Bhagwat, RSS Chief said, “Our country believes in ‘Vasudeva Kutumbakam’ i.e world is our guest. This nature of our countrymen can find a solution to every problem. We believe in taking everyone along. Today is a new beginning of a new India.”

“Under the leadership of PM Narendra Modi, the power of India’s democratic values and its judiciary has shown the world that how can matters by resolved peacefully, democratically and constitutionally,” UP CM Yogi Adityanath said at the Ayodhya event.

Patanjali founder Baba Ramdev, who was also invited for the event, shared that on the occasion of building the Ram Mandir, his organization plans to build a grand ‘gurukul’ in Ayodhya where people from all over the world will be able to study Ayurveda.

While others celebrated the event Live, there were few who sent their heartfelt wishes from a distance. Madhya Pradesh Chief Minister Shivraj Singh Chouhan and Maharashtra Union Minister Nitin Gadkari shared their feelings from their respective origins.


Iqbal Ansari, one of the seven litigants from the Muslim side in the Ram Janmabhoomi-Babri Masjid case and Mohammad Shareef, 82, and “Padma Shri” holder, who performed last rites of more than 25,000 unclaimed bodies over a three-decade span were also invited for the ‘Bhoomi Pujan’.

ALSO READ: Everything To Know About A Person Belonging To Leo Sign

If you ever wished for free Netflix or asked the same from a friend and they've denied only...
News

Delhi Metro Grey Line (Dwarka-Najafgarh) is good to go to accomplish the Delhi-Haryana border at Dhansa this ensuing...
Finance