Paytm has been one of the entities in today’s time which has turned from a luxury to a necessity for most of the urban population. But recently, the Payments app has been under a very vast attack which targetted common users and there were serious victims of the same.

The attack was quite simple yet complex for those who didn’t understand the basics of technology. The attack was done in the name of fooling the Paytm users by initially sending them a message saying that they were lacking basic KYC and that there account would be seized if they fail to do so in under a given timeline. 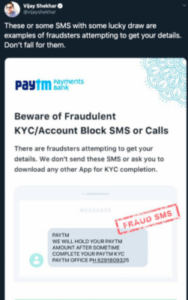 For the next step, they would always add a helpline number where you could call and get your problem solved by the desk attended which was there in the name of Paytm but actually was a fraud. And upon calling such attendant the user was strangled into a series of steps which then make them vulnerable for the attack.

The steps involve asking the user to download Teamviewer or Any desk application which gives instant access to your desktop to the fraudulent person on the other side. Furthermore, they ask you to pay one rupee to a paytm number and while doing that, they ask you not to choose from any pre-existing payment methods but reenter card details and CVV in order to write that down for later use.

After the transaction completes, the fraudulent person would ask you to wait up and not to close any open application. The next step involves them using up your card details in order to pay themselves a huge amount and getting the authentication One time passwords or OTP by using the already opened Teamviewer or Anydesk server.

If you have any disruption beyond this point like a network error or realizing what they are doing, then probably you would be saved from getting yourself caught in the act otherwise they would already be celebrating with your hard-earned money right at this point in the process.


The main target audience for the frauds was an aged person who uses paytm but is not that technically sound. They have already targetted a mass audience and some people are already caught in the wind but fortunately, due to aware youngsters sharing these frauds and media covering it, their actions have been minimized to a greater extent.

Later on, paytm added a pop-up in their application displaying details of the act and making everybody aware of the same as soon as they open the application.
So, The next time you receive such messages you know they aren’t worth your time and money for sure!

The Real Reason Behind Why Paytm Was Removed From the Play Store?

Paytm was removed from the Google play store temporarily, it is one of the biggest and most trusted...
Technology

Paytm Mini Appstore is the new inclusion from Paytm's side and this time they're looking to take over...
News

Indiabulls is a lending company that has made headlines recently because of a controversy. This controversy was with...
News

Everything You Need to Know About Paytm’s Newly Added Charges.

Paytm is an e-commerce payment system trusted by millions of users with a value of $10 billion in...
News

The Real Reason Behind Why Paytm Was Removed From the Play Store?

Paytm was removed from the Google play store temporarily, it is one of the biggest and most trusted...
Technology

Paytm Mini Appstore is the new inclusion from Paytm's side and this time they're looking to take over...
Technology

While hacking a portable device mobile phone has been an annoyance for years, Apple Inc.'s iPhone 13 has...

10 Best Coworking Spaces in Delhi for Your Budding Business

Looking for a coworking space in Delhi where you...