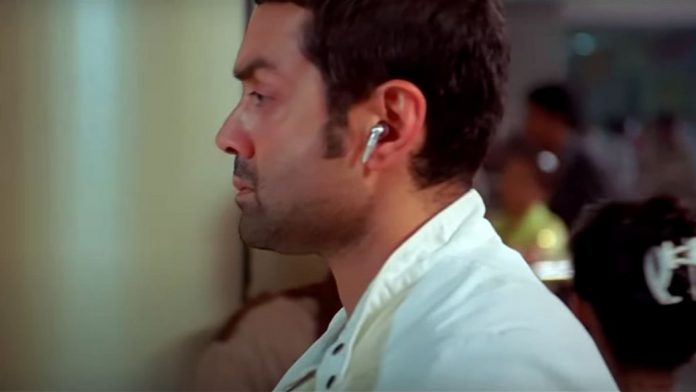 In this era, we know that it takes one glance from a creative someone and anything can go viral. After ‘Pawry Ho Ri Hai’ by Yashraj Mukhate, another viral sensation is coming into the limelight but unlike the ‘Pawry’ girl, we all know the person involved.


Yes! It’s none other than the Bollywood famed, Bobby Deol. Now, why is he getting all the attention. Well! Some theories say that he might be a time traveler, sound interesting, right? Let’s get in deep and get to know the whole story. Shall we?

So, it all began when a Twitter account with the handle @Bobbywood noticed that in a movie from 2008 named ‘Chamku’ there was something that needs pointing out.


Playing the lead in the same movie, midway through the film, Bobby Deol can be seen wearing something similar to Apple’s airpods. Firstly, it’s an amazing observation and secondly, Twitter fired up after this tweet was shared.

Starting from theories to memes and whatnot, everything started pouting in and the internet went haywire. Well! It’s definitely fun to watch a new trend and all the sort of fun that comes around the concept. So, here’s a glimpse of what all got down during the internet ruckus.

@Puneite_ lord bobby was ahead of his time

Where do you think apple got the idea from? 🙌🔥

It is important for context to know that Apple’s first airport was launched in 2016, exactly 8 years after the release of this movie.

So, what’s your opinion, is Bobby Deol a time traveler or has Apple actually taken design inspiration from the ‘Chamku’ movie from 2008?


Whatever might be the truth, one fact remains constant that nothing can beat the eyes of these twitteratis or internet people, right?

We’re hoping for this to reach Bobby Deol himself and waiting for his reaction, which will be even funnier. But to be updated about that, first, you need to follow us on our Google News Page, go on, press that button right now and we’ll be back with amazing content every time we get the chance.