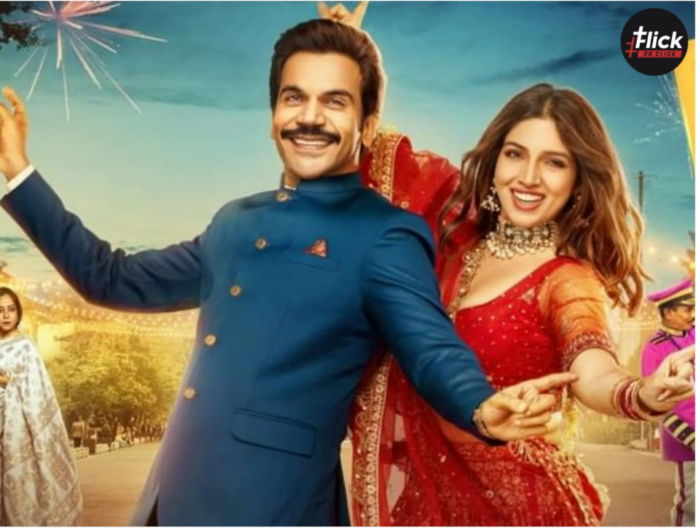 Badhaai Do Movie review: In Contrast to Badhaai ho Movie, Badhaai do movie is miles away. The film, starring Raj kummar Rao and Bhumi Pednekar, is live in theatres today, February 11. Social issues like, Men and women are equally affected by society’s patriarchal structure. We rarely discuss the latter. If a woman is supposed to be fair-skinned and skilled at dealing with ghar-grahasti, the husband must adopt the position of the giver, strong and wealthy.

In this, a lesbian lady and homosexual guy have not sufficient foot space to stand strong, thereby concealing their identification and natural desire to fit in. Badhaai Do introduces us to two such people, Shardul (Raj kummar Rao) and Sumi (Bhumi Pednekar), and attempts to build a narrative about how these two Incompatible fits in together.

Sumi and Shardul live parallel and socially restricted lives as openly homosexual and lesbian people. When they opt for a settlement marriage to appease their overbearing families.

They believe it will provide them with shelter while they seek companions of their choice. The story of this household entertainer revolves around what they ultimately accomplish and how they do it.

Marriages are created in paradise. Surprisingly, a large proportion of these ‘heavenly weddings’ appear all shining and bright as a result of different sacrifices made by partners. In Badhaai Do, this spousal sacrifice is of a different sort one that is rarely spoken but has always existed. In terms of the movie’s pace, there are some comedic parts interspersed among some wild shots, as well as some profound and heartfelt ones that make you weep and grin at the same time.

Rajkummar, who portrays Shardul Thakur, is spot-on as a gay policeman and, as usual, leaves an impression with his performance. His efforts in getting fit for the role must also be commended. Bhumi, on the other side, portrays Suman Singh.

The lesbian spouse in the lavender wedding. She has also added value to the storyline and performed admirably in her part as Rajkummar’s on-screen spouse.

The film, directed and produced by Harshavardhan Kulkarni, not just focuses on forbidden issues, but it also exposes how certain Indian families push newlywed people to have children, which is also a serious problem for couples and families these times.

In terms of speech, the movie is jam-packed with one-liners and punch remarks that will make you laugh even if you’re in the middle of an important moment.

When Shardul’s (Rajkummar) and Suman’s (Bhumi) families learn of their lavender wedding, the plot twists. Set against the background of a rural and traditional household.

Rajkummar and Bhumi’s quest to persuade their respective parents is eye-opening for people who have yet to witness the hardship that individuals of the LGBTQ+ community experience in our nation. The psychological relief one feels after getting out to their parents and community is also eloquently shown in the movie.

Overall, the film attempted to shed some illumination on a topic that many people in society avoid even discussing. What helps Badhaai Do distinguish out is that love is central to the plot, and it is wonderful.

It’s just that this isn’t your usual loving relationship, and it’s certainly not a conventional Hindi rom-com. Badhaai Do may not be the trailblazer for the LGBTQ+ community. However,  he is certainly a plume in the hat for those who show the true shades of the Honor.

Read More: Gehraiyaan Review: Things You Should Know Before Watching