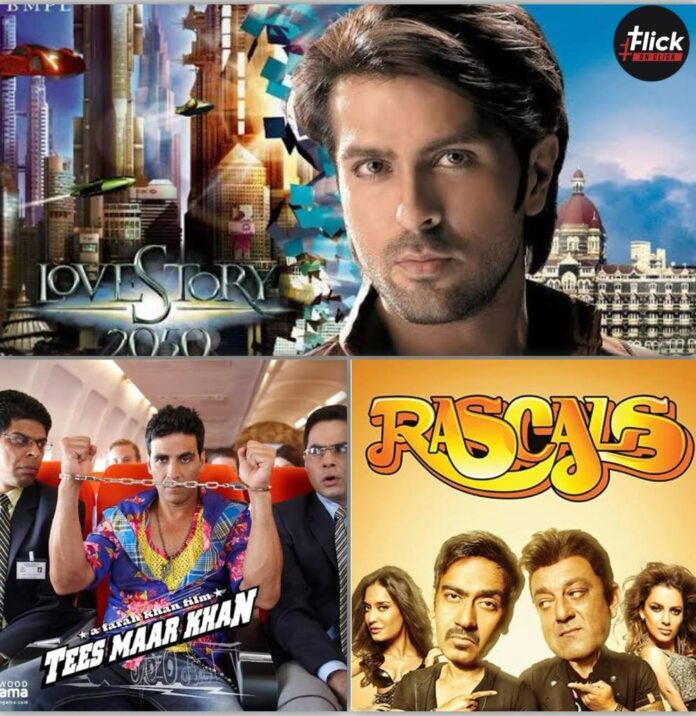 When it comes to Hindi Movies, there is no lack of films that are so dumb that just thinking about them makes us shudder. These films make us reconsider our faith in filmmaking. However, the public is so dynamic that it is impossible to forecast which films will work and which will not, even though some are overtly clear. So why don’t we let IMDB choose the Annoying and best movies? IMDB is a massive database in which all films are rated out of ten.

According to IMDB rankings, the following movies are among the annoying 8 in the Bollywood:

Fans only came to see this flick because of Katrina Kaif’s ‘Sheila ki Jawani’ performance. But even she couldn’t redeem a comic that can only make you giggle if you’ve switched off your head as well as your smartphone in the cinema. As per the IMDB rating, Tees Maar Khan ranks 2.5 out of 10 and it is first on our list of Annoying movies.

The film has been described as a 3rd-grade comedy, a sequence of silly mishaps, and a comedy that was genuinely not humorous. There are so many flaws in the film that your senses will abandon you. Cons con a man, who then con the circus men, only to discover that he has been duped by the cons. As per the IMDB, rating Rascals ranks 2.8 out of 10 and it is Second on our list of Annoying movies.

The plot revolves around a couple who are both relationship breakers and divorce managers. But they also push people to split to make money. Similarly, we are forced to see films that we hate paying for. Before you view this one, you may need to separate ‘your preconceptions. As per the IMDB rating, Jodi Breakers ranks 3.5 out of 10.

Voodoo techniques that defy logic and curative powers that have suffocated science Sanjay Dutt was also seen stroking Bipasha Basu’s temple to give her ‘woman vibes’ (yes, that is the term used). It is beyond our logic and comprehension. As per the IMDB rating, Rudraksh ranks 2.9 out of 10.

Paglapur is a community founded by mental institution escapees (so smart). No, not at all. You can end up thinking like you’re a part of this town that has been hidden from the rest of the globe for the past 60 years. As per the IMDB rating, Joker ranks 2.5 out of 10.

A love story is one of the most annoying movies of all time, as per IMDB it scores 2.8 out of 10. Hrithik Roshan Part 2 (Harman Baweja) intends to resurrect his love from the grave. He occurs to have a time machine, rather than traveling back in time, he travels forward to 2050. Isn’t it brilliant?

When the original Sholay version was launched, all hope was extinguished. Not only did he add his own identity in the title, but he also cast Amitabh Bachchan, the hero of the original film, as the enemy in this one. As per the IMDB rating, Ram Gopal Varma ki Aag scores 2.5 out of 10.

Previous article8 Best Upcoming Series in India That You Cannot Miss
Next article8 Books in India that are worth reading in 2022!
Udit Arora