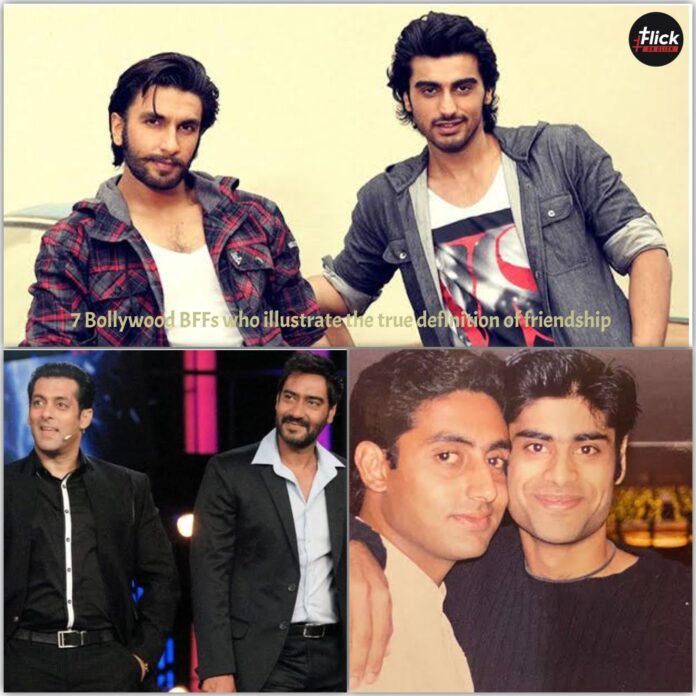 In our life, many folks come and leave. But those who remain around are typically the ones who get to know you through and out and become the closest of friends, becoming more precious than our marriages at times, albeit this is an unjust comparison. Nowadays, when we have begun to question the commitment of everyone around us, there are still certain people who provide us with a glimpse of hope. Using the Bollywood friendship as an example, here are eight such pairs of best friends whose bond has endured the test of time and defined what true friendship implies.

Few people are aware of their Bollywood friendship because they rarely exhibit it on social media or elsewhere. Salman and Ajay have a very good friends, as seen by the latter’s appearance in Salman’s film Ready and Salman’s appearance in Ajay’s film Son Of Sardar.  Shailesh Giri, a popular film publicist, once informed the press that “Salman and Ajay Devgn’s friendship goes a long way.  They even have special screenings of one other’s movies.

This girl squad has a lot of followers on social media. Kareena also served as a bridesmaid in Amrita Arora’s marriage. In a 2006 interview, Kareena stated about Amrita, I genuinely admire that girl. She’s relaxed, carefree, and honest, just like myself. Our bond cannot be compared to other Bollywood friendships and relationships. Amrita has previously stated that she and Kareena discuss everything under the sun and engage in news from time to time.

Alia, Parineeti, and Shraddha made their Bollywood debuts around the same time and have been in friendship ever since. When these stunning ladies pose for a picture, it is nothing short of a visual delight for everyone. When they’re caught on an outing together, their images flood our social media screens. The way these girls look out for each other is clear from their Instagram images on each other’s photos. This beautiful trio demonstrates that you can work in the same industry, be competitors, and still be excellent friends.

Sikander and Abhishek were childhood friends and are now more like brothers. Abhishek regards him as a younger brother. Sikander once stated that when Abhishek’s daughter Aaradhya was born, he rejoiced as the true chachu. Abhishek once uploaded an old photo of the two together on Instagram with a loving remark, to which Sikander responded, Rulayega kya pagle.

Ahmed Khan, a designer, and actor Shahid Kapoor have been friends from the beginning of their careers. Ahmed appeared in the actor’s debut music video, “Aankhon Me Tera Hi Sapna,” and they resonated that has endured the test of time. According to reports, Shahid was the first man to hold Khan’s new infant, even before his family.

Who hasn’t heard of Bollywood’s famed “Gunday”? Arjun Kapoor and Ranveer Singh are close and treat one other like family. Arjun considers himself the sautan of Ranveer’s bride, Deepika.

Juhi and SRK demonstrated their closeness when Shahrukh’s kid Aryan Khan became caught in muddy waters, as we all witnessed. Juhi and Salman were the only 2 people we noticed taking action to assist the man. Juhi and Shahrukh have been friends for a long time, and while they have had some difficult moments, we can see and learn from them about how friends should be. About a previous incident in which Juhi lost her mother, she stated that SRK was her rock of support.

Read More: How Much Do Bollywood Actresses Earn Per Movie In 2022

Previous article
Upcoming Movies and Shows Releasing on OTT in June 2022 in India
Next article
Panchayat Season 3 Release Date: What We Know So Far
Flickonclick Team

Huma Qureshi has revealed that the Dobaaraa director Anurag Kashyap had promised to cast her in a movie...
News

The Bengaluru police detained Siddhanth Kapoor, the son of Bollywood actor Shakti Kapoor after he tested positive for...
Entertainment

Pathaan tickets are selling like hotcakes in Germany. It is a known fact Shah Rukh Khan has a...