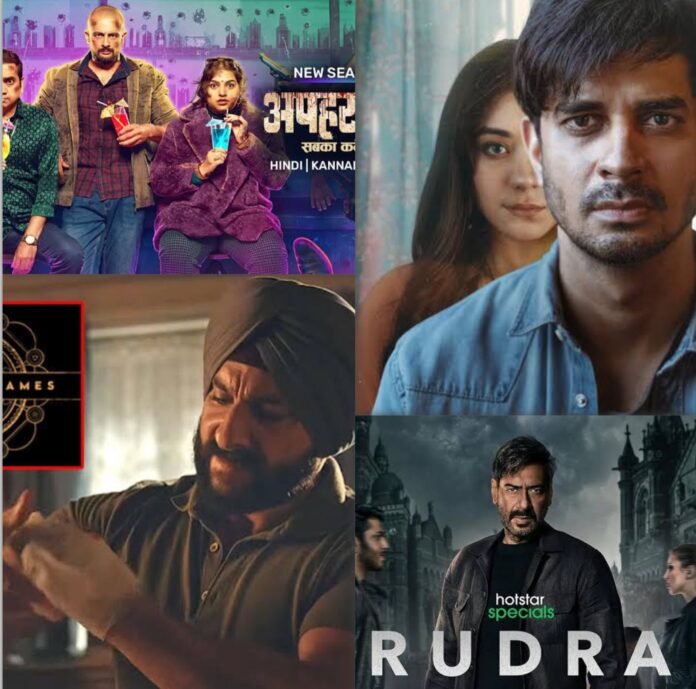 Do you love watching suspense and thriller web series on OTT platforms? Thrillers are still one of the most popular genres, with millions of fans all over the world. It’s challenging to keep the pace of the finest thriller web series with so much content being developed and released day after day, week, and monthly.  To make your task easier, Flickonclick has developed a list of the greatest Hindi thriller series of 2022 that will undoubtedly give you shivers. Check out the greatest Hindi movies of 2022 as well (so far). Seat back and relax for an exciting binge-watching experience.

Sacred Games is one of the top thriller web series that will keep you hooked until the end of the season. Its story revolves around obtaining false information on the whereabouts of underworld lord Ganesh Gaitonde, police officer Sartaj Singh embarks on a risky cat-and-mouse pursuit around Mumbai. Among the chaos, indications of a corrupt underground emerge. Singh conducts his investigation after being removed from the Gaitonde case in an attempt to save Mumbai from impending calamity. Flashbacks expose some of the crimes committed by Gaitonde over the decades.

The Global Emmy Award-winning television series Delhi Crime is back for its season 2, with the ensemble resuming their roles to investigate and solve a fresh crime. In the upcoming season, skilled police officer DCP Vartika Chaturvedi will lead her team alongside recently appointed Neeti Singh and Vartika’s rightmost fella Bhupendra Singh aka Bhupi as they embark on another difficult inquiry. If you have still not watched Chapter 1 of Delhi Crime then you have missed one of the best thriller web series, go ahead and binge-watch season 1 to fall into a suspenseful drama only on Netflix.

This series, starring Madhur Dixit, is among the most famous series that swept Social media by storm. Discovering Anamika was the previous title for the Netflix original. The suspense drama is laced with goosebumps and centers on a Bollywood diva who is also a mom and wife. However, her sudden absence prompts her parents and the police to look for her.

Have you ever considered the consequences of abusing power? This finest Hindi thriller web series on our list is about a politician’s daughter who is chasing a man and will go to any distance to get him. The boy, on the other hand, is unwilling to do anything with her. The road ahead is treacherous.

If you haven’t seen this Hindi unique series yet, you should add it to your favorite list. Undekhi’s season premiere picks up from the suspense at the end of the first season, becoming deadlier, darker, and chillier. The series, produced by Ashish R. Shukla, depicts the two faces of our civilization. On how the powerful and powerful can bend the rules and get away with something. The other is a place where individuals are abused and tormented.

Another intriguing series available to stream on Zee5 is on our list that has a compelling plot that will keep you glued to your seat. The six-part drama follows the lives of two men, Jaggi and Daljeet. The older brother, Jaggi, lives the luxurious and apparently ideal life, while the smaller brother, Daljeet, tries to make ends meet while maintaining a classic book shop/café. When they knock over an elderly guy while traveling home one night, their lives spiral out of reach.

Following the popularity of the first chapter, the program returned with a new exciting narrative. Rudra Srivastav is back in society in Serbia after being led into snatching a woman in the season premiere. And everything will only get deadlier and uglier this time. Arunoday Singh, Nidhi Singh, Snehil Dixit Mehra, and Saanand Verma star in the major roles of the show.

Viewers complimented Sakshi Tanwar’s performance, storyline, and thriller plot in this drama, which makes for an entertaining watch. When her child is murdered, a middle-aged woman attempts to uncover the truth and identify the true perpetrator. However, she becomes entangled in performance and eventually kills a mafia chief, unknowingly sweeping into the underground, where her cult gradually gains popularity. The show was produced by Atul Mongia and stars Jay Shanker Pandey, Prashant Narayanan, Ravish Srivastava, and Vishwanath Kulkarni in the major roles. Mai is available to stream on the Netflix platform.

If you enjoy superb acting, this film starring Richa Chadha and Pratik Gandhi is a must-see. This Hindi thriller series is for those who enjoy crime and mystery and is based on the book Six Suspects by author Vikas Swarup. When Vicky Rai, an entrepreneur and the son of a minister, is assassinated at his party, it sparks a year-long inquiry. It follows a DCP and a CBI investigator as they probe the death of the minister’s son. The program is produced by Tigmanshu Dhulia and stars Ashutosh Rana in a prominent role.

If you’ve watched Luther, you might like to view the authorized Hindi remake. One of the most heard thriller episodes was Ajay Devgn’s OTT breakthrough, in which he played a cop. DCP Rudra Veer Singh and his squad deal with unusual and unusually disturbed offenders.

Upcoming Bold and Hot Web Series on OTT in 2022

Bold and Hot web series is a smoking combo that makes for engaging and sensational viewing. These sorts...
Entertainment

Nothing is more satisfying than resonating with the characters in a movie or a series, feeling what they...