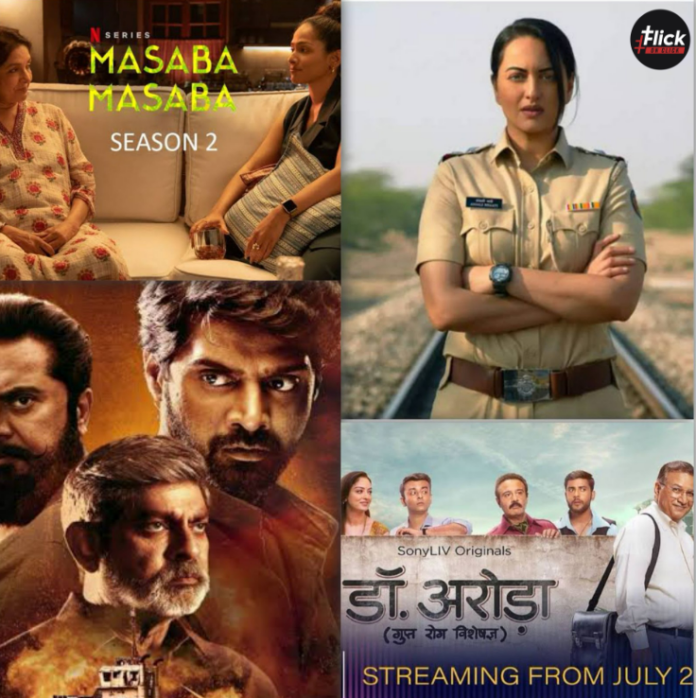 Let’s welcome monsoon with the thriller web series, late-night movies, and romantic shows in July 2022. OTT platforms will never let you down because with every season you will get new shows and thriller movies that are packed with the punch of entertainment and laughter.

No one can avoid the temptation to binge-watch. And one of the best things about web series is that they provide a wonderful chance to do so. Over the last few years, there has been substantial growth in the number of episodes produced across all channels, particularly OTT.

They have instantly taken over the imaginations of the viewers and provided us with a really pleasant option for cinema. There are many new releases planned for 2022, and we are here to inform you about some of the top forthcoming web series in July 2022 that you should keep an eye out for.

Masaba Masaba Season 2 will be available to stream on Netflix on July 29th. In addition to Masaba Gupta, renowned performer and her parents Neena Gupta, as well as Neil Bhoopalam and Rytasha Rathore, will renew their roles. The next episode of the slice-of-life show follows the life of fashion designer Masaba Gupta, who will see the main protagonist face fresh peaks and valleys. Season 2 witnesses how these powerful women retake their kingdoms, reclaim control of their lives and negotiate new terrains.

The title of this new TV series 2022 is so terrifying that just thinking about it sends shivers down our spine. This is one of the best forthcoming Netflix shows, and it will premiere on July 20, 2022. It follows a heinous serial murderer who violently murders victims and beheads their corpses. What’s more disturbing is that this terrifying serial killer dumps the dead people of his captives near Delhi’s Tihar Jail. According to the plot of the show, this next Netflix new show will be spectacular, mind-boggling, and terrifying.

Parampara season 1 is a crime drama television series that premiered on Disney+Hotstar on December 24, 2021. This Indian Telugu linguistic show was a smash hit, and fans have been clamoring for season 2 to begin. The wait is finally over, as Parampara season 2 will be released on July 21, 2022.  Season 2 will feature the return of the core actors, as well as more drama, suspense, and crime aspects.  This TV drama recounts the path of an orphan who is alert to his uncle’s bad intentions and bears vengeance against him for mistreating his father. Following the success of season 1, Parampara season 2 is poised to entertain viewers with its strong adrenaline components.

It is often tough to choose between being a pleasant homemaker and starting a career away from town. Ghar Waapsi is a family drama about Shekhar, who goes to his hometown after being dismissed from his work in Bengaluru but does not inform his parents. This is one of the greatest new web shows to watch since the trailer depicts how people balance their personal and professional lives while living away from home to achieve their jobs. Prepare for an emotional roller coaster with this family television drama. Ghar Waapsi will premiere on Disney + Hotstar on July 22, 2022.

Sonakshi Sinha, the Dabangg star, is back at work with the cop show Dahaad. She is portraying a tough-as-nails policeman in khaki.  The streaming service amazon prime made its official social media accounts, along with a snapshot of Sinha’s first look at the series, which debuted last year. Amazon Prime Video intimated in the post that the ‘enthralling’ series will concentrate on the subject of serial homicides. The plot is set in a tiny village and follows a cop as he conducts an inquiry. Dahaad is an anticipated web series on Amazon Prime that will premiere on July 27, 2022.

Locke & Key is a great Netflix drama about three brothers who relocate to their ancient homeland with their mom after their dad dies. They find some mysterious keys in the home that they feel are linked to their father’s demise. The tremendous suspense aspects in the previous two seasons of Locke & Key got people’s hearts racing, and now fans are ready to find out what the future holds for the Locke twins. Locke & Key Season 3 will be the series’s final season, as intended by the show’s creators, and will broadcast on August 10, 2022.

Doctor Arora is a new upcoming web show in India in 2022 that is planned to discuss a taboo subject in India: sexual troubles between couples.  This lighthearted, funny TV show depicts the story of Dr. Arora, who assists patients who are having sexual problems.  This show, produced by Imtiaz Ali, is a revolution in the Indian entertainment business. Hence, it addresses an essential problem that needs greater discussion so that it can be normalized. On July 22, 2022, Doctor Arora will be available to stream on SonyLIV.

Jugjugg Jeeyo, starring Varun Dhawan and Kiara Advani, was premiered in the theater on June 24, 2022. After considerable hoopla and extensive promotion across the nation. Prajakta Koli is introduced to the big screen in this film, which also stars Anil Kapoor, Neetu Kapoor, and Maniesh Paul in the major roles. The film is now ready for release on the digital marketplace. According to news, Jugjugg Jeeyo will be available on Amazon Prime Video on July 23, 2022.

Meme Boys, SonyLiv’s first Tamil exclusive, will launch on July 22, 2022. Memes are omnipresent these days, and it’s difficult to go through social media platforms without coming across one. Meme Boys, directed by Arun Koushik, tells the narrative of four teenagers who create an undercover social media profile called Meme Boys. They exchange memes about their college management there. So, this begins as a fun hobby for these four students but quickly devolves into a cat-and-mouse battle between the Meme Boys founders and the Dean. Who will come out on top in this game? Find out by watching this entertaining thriller series.

Never Have I Ever Season 2 concluded with Paxton and Devi kissing and dancing together at a celebration. Ben is surprised to learn that Devi originally chose him over Paxton. What happens next? Will there be another romantic drama? Will Devi go with Paxton or Ben? We are all yearning for answers, and our curiosity will be satisfied only when Season 3 of this fantastic program premieres. Never Have I Ever is a coming-of-age Television program that depicts the tumultuous lifestyle of Devi Vishwakumar, an Indian-American adolescent. This series’ first season was well welcomed by critics and viewers alike. Season 3 of Never Have I Ever is planned to premiere on Netflix on August 12, 2022.

Disney+ Hostar launched a number of new shows and movies in April 2022, including Moonlight, Death on the...
Entertainment

Ponniyin Selvan, the upcoming historical fiction directed by Mani Ratnam, who co-produced it with Allirajah Subaskaran, will release...
Lifestyle