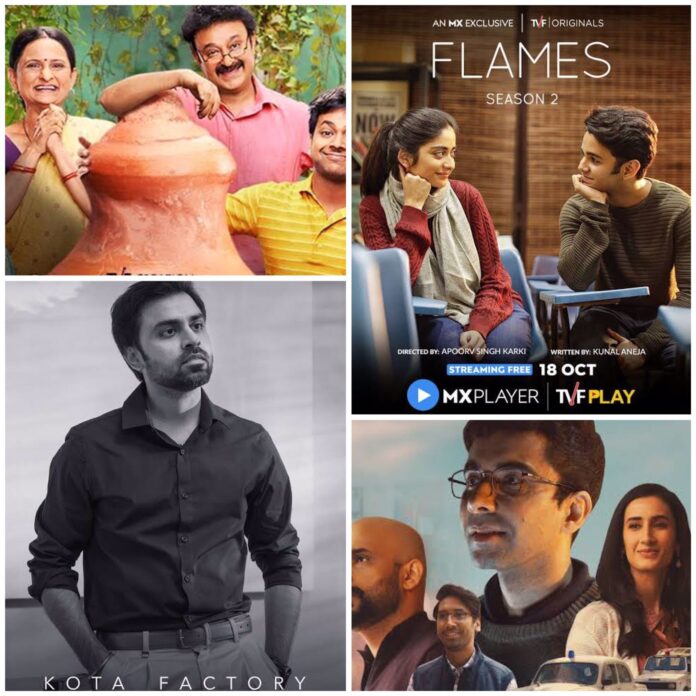 The Viral Fever (TVF) is a YouTube channel that began in 2010. Their realistic and rather unique stuff has stolen our hearts and souls over and over again. Whether a thriller or humour, they’ve raised the standard for online series very high. Today, Flickonclick is bringing a list of the ten best TVF series that, in our perspective, are a must-see. So, if you haven’t already, make sure you watch them all. Continue reading!

Pitchers identified the importance of entrepreneurs and have a storyline based on millions of young men and women who want to establish their businesses. It’s a great endeavour by TVF to represent the daily lives of IT professionals in the country. Pitchers have five episodes that are amusing and engaging. Furthermore, the main actors’ skills make it worth watching again!

It is the narrative of a 16-year-old boy. He moves from Itarsi to Kota. It highlights the student experience there and Vaibhav’s struggles to seek admission to IIT. It is one of the best TVF series centred on India’s coaching capital, Kota. It’s humorous, a little scary, heartbreaking, and a lot of fun. Furthermore, the fact that it was shot in monochrome, i.e. black and white theme, distinguishes it from other web series. Every episode of Kota Factory is worth seeing.

An online series is about the lifestyle of every 90s kid, to which most of us can relate. Yeh Meri Family is a bittersweet journey of a typical Indian family. Moreover, it is a comedy series,  the narrative of a 12-year-old boy from Rajasthan. Yeh Meri Family nicely displays the boy’s various feelings for his family members. It is one of the best and TVF’s most-watched series.

This series delves into the problems that a young couple experiences in an urban setting. It portrays the narrative of a sweet couple in long-distance dating, and as the show advances, it portrays modern-day relationship challenges. The show provides an impressive plot and outstanding performances from the main cast. Both the parts of this best series can be viewed on YouTube and the TVFPlay app.

There is no doubt that TVF delivers the best web- series on Indian Streaming sites, and this program is a perfect example. Aspirant is a documentary that depicts the lives and difficulties of UPSC (Union Public Service Commission) students. This story covers the lives of three friends, Guri, Abhilasha, and SK, who reside in Delhi. Aspirant brings forth the full pathway, showcasing the hardship, difficulties, stress, and drama that happens behind the building of an IPS or CSE.

Abhishek Tripathi, an engineering graduate, is compelled to take a job as the assistant of a rural village’s Panchayat workplace. Jitendra Kumar is outstanding in his significant part, and all of the other characters are as nicely represented. As he battles with his own ambitions and goals, he is introduced to the locals with completely different norms, traditions, and cultures.

Have you ever thought about what ends up happening if 3 siblings who have lost touch over the years take a car trip together? It’s unquestionably a once-in-a-lifetime experience, complete with emotional ups and downs. This best TVF series may wind up being your favourite because it has a lot of humorous moments mixed in with some melodrama and sorrow.

Flames is a beautiful love story with two seasons and 5 episodes each. You will laugh and cry at the same time while watching the series. This play will take you again to your school days, to the days of Orkut, slam books, and flames. It is heartfelt and is highly recommended to watch.

This pleasant show is about the Mishra family, a typical middle-class family, and their lifestyle. Gullak is a realistic and simple show that flawlessly rides through the family’s moments of happiness and sorrow. Sibling fights, festival celebrations, exam grades, and other realistic topics are addressed with authenticity and creativity. Gullak is a must-watch best TVF series.

Directed by Prem Mistry, ImMature tells the story of a teenager who tries to impress a beautiful and famous girl in his school. While doing so, the series depicts his simplicity, awkwardness, and diligence. Because it is a story about youth, today’s youth enjoy it. Furthermore, you will not be tired and will be glued to the screens throughout this best TVF series.

Avrodh Season 2 Review Punchline: The predictable story has been moulded into a gripping narrative that keeps you...
Entertainment